Though I find it darn-near impossible to believe, it has been more than five years since we published plans for a full-sized workbench. That was Christopher Schwarz’s “Return of Roubo,” the cherry-topped bench he built using mostly hand tools (you’ll find it in the August 2010 issue as well as on a  download, “Build an 18th-Century Workbench” that includes a bunch of additional resources).

Chris is back to bench building in our November issue, with a decidedly different style of bench: a knockdown English version that’s so sturdy you won’t believe it’s portable. Bonus: it’s cheap and simple to build. (Plus you’ll find step-by-step instruction for  mid-century modern clock, William Ng’s sharpening pond, the winners of the 2015 PWM Excellence Awards and more.)

The issue mails to subscribers on or around Sept. 30, and will be on newsstands Oct. 14. 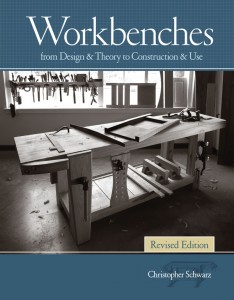 Also on the near horizon is a revised version of Chris’s book “Workbenches: From Design & Theory to Construction & Use.”