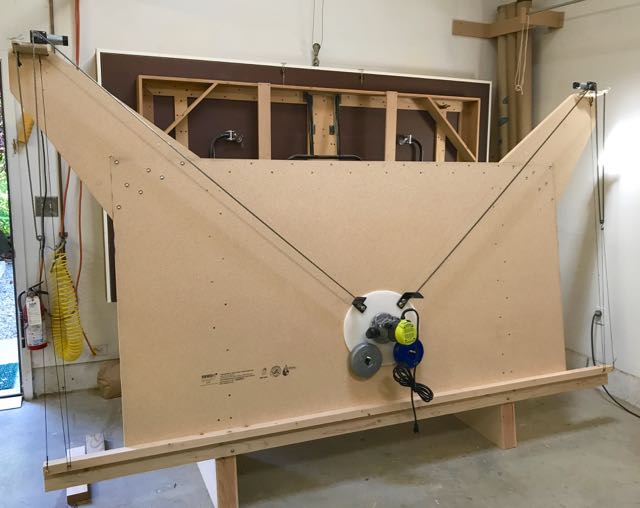 The Maslow is not a conventional CNC. It’s kit based, and costs less than $500. $350 if you’ve got a couple of 2” x 4”s and some plywood to throw in. If you’re new to the Maslow, here’s Part One, Two and Three. This started out as a crowd-funded Kickstarter project, which means that the product is still in a development phase.

As you can see, the Maslow is rather unique. Rather than a flatbed CNC, the machine works vertically, suspending a router by a pair of chains that wrap around a couple of small motors. Keep in mind that the way the machine is designed and it’s low cost make it hard to compare it to most CNCs. The Maslow is better for cutting designs from sheets of flat material like plywood or MDF, then smaller solid wood parts.

As part of the development phase, a group of early backers volunteered to be “beta testers”. What that means is that the product is nearing final development. Real world feedback is vital so that the final kits and instructions will be as fine tuned as possible. 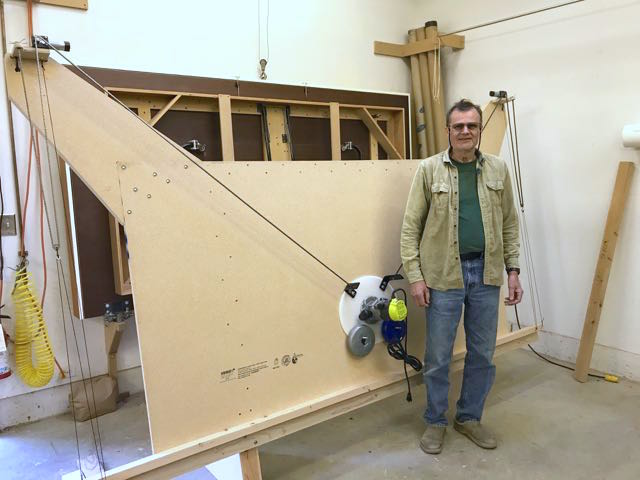 Furniture maker Curtis Erpelding in front of his much improved Maslow frame.

A few weeks ago, I received my kit so that I could experience what it’s like to put the Maslow together and then run it through its paces. Unfortunately, it arrived just as I was preparing to leave town for a few weeks. So, I asked fellow furniture maker, Curtis Erpelding, to give the Maslow a try. He’s completed the frame and mechanical assembly and will soon be installing the electronic components and downloading the software that guides the machine.

If you look at earlier photos of the Maslow, you’ll notice that it’s made out of 2”x4” boards and a sheet of plywood. That should work okay, but Curtis is the kind of fellow that doesn’t do anything halfway. Having built his own beautifully designed and finely tuned CNC, he knows the value of making a CNC as flat and square as possible. So, he made a much stiffer frame and a flatter bed for the Maslow. 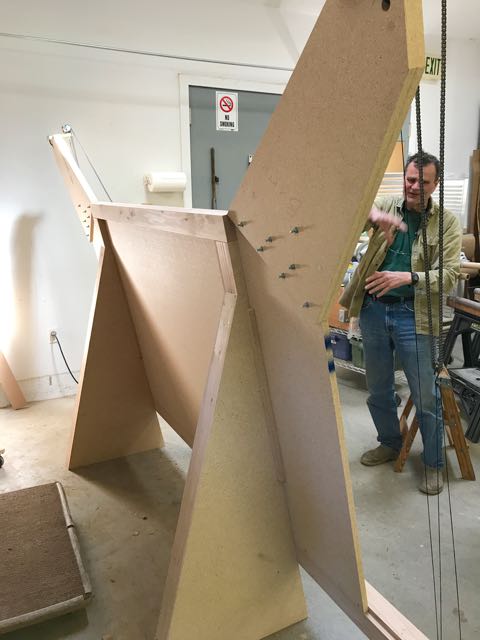 Curtis explains how he went about stiffening up the Maslow’s frame, wings, and bed.

Being the incredible furniture maker he is, Curtis jointed and flattened all the frame parts and used chipboard instead of plywood for the bed. Chipboard is not only cheaper, but it’s also heavy and very flat — desirable features for any CNC. And, to help the router move smoothly, he made his router base out of HDPE plastic rather than plywood. Though the material works well for reducing friction,  once he started running tests, the base flexes too much as the CNC moves. He has since moved to a stiffer Baltic Birch router base with a laminate on the bottom surface to reduce friction.

The Kickstarter phase of the Maslow CNC project closed several months back. Ultimately, the project is being shared as an open source project, where everything from design to source code for the software is publicly available. But, a lot of us would rather buy a kit with all the parts included. Fortunately, Maslow is accepting more orders for the next few weeks or so. If you’re interested, check into it soon. Remember that this CNC kit is very basic, lightly documented and you’ll need to be comfortable with computers and software to make it work. It’s really a “maker” project. To learn more, here’s a link to the Maslow website and a secret link to order one.

Curtis has the Maslow up and running now and I’ll be back soon to report on the results. If it’s as accurate as we’re all hoping, from a woodworker’s point of view, it could be a tool for making patterns for solid wood furniture projects and used on other plywood based designs and more. In any case, it’s a remarkable idea for a simple and inexpensive CNC that will live on in the open source world. I look forward to seeing what people make with it.

To see the entire series on the Maslow CNC click here. How to Fix a Split SeatShop Blog