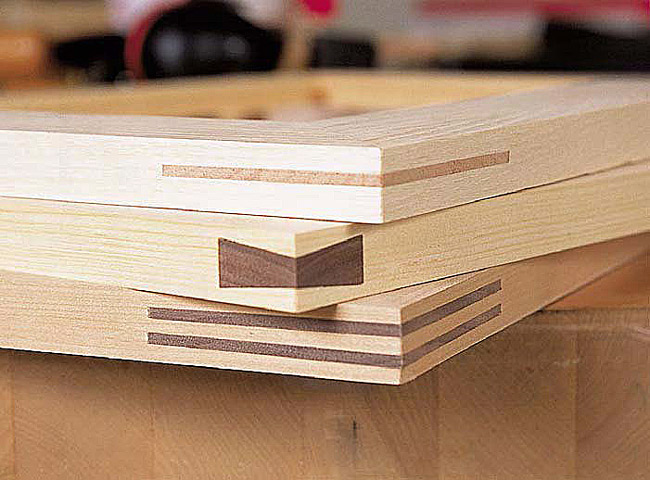 Spline and dovetail keys are basically just exposed splines. After the joint is glued up, just saw or rout a slot through its edge, then glue a key into the slot. Typically, the key is a contrasting wood so it can stand out.

These elegant joints are difficult to cut and clamp. These jigs can help.

by Bill Hylton
from the December 2003 issue

The only frame joint that doesn’t leave a bit of end grain exposed is the miter joint. Given that it’s almost invisible when done right, it’s visually appealing, so you see it used for picture frames, for architectural trim, when assembling mouldings and occasionally in face or door frames.

But it can be a problematic joint.

Structurally, it’s a bit weak. Because it mates one tangentially cut end-grain surface (sometimes called “short grain”) with another, it’s weaker than a long-grain-to-long-grain joint. It’s stronger than end-grain to end-grain, but not much. Run some fasteners into a miter joint and you’re driving them into end grain, where they won’t hold well. Angling the fasteners helps, but not a lot.

Also, a miter is tough to cut accurately. Haven’t we all struggled with a frame that isn’t square and has joints that don’t close because some of the cuts were half a degree off perfect? Try all sorts of approaches – miter saws, table-saw jigs, stationary sanders, even hand tools such as block planes and miter trimmers – but nothing seems to work.

On top of that, joint assembly is maddening because you have to find a way to prevent
the mating pieces from sliding out of line when you apply clamping pressure.

If that isn’t enough to make you shy away, wood movement stresses the joint and degrades
its appearance, especially with stock that is wider than 3″. As the wood expands, the joint tends to open at the outside; when it contracts, the joint opens at the inside. The wider the stock and the more unstable the species, the more pronounced the effect.

For this reason, it’s a good idea to limit the stock width you join with miters. Picture framers and trim carpenters compensate for this effect by layering several thinner mouldings to create large frames.

Download the PDF of the full article:
Frame Miter Joints The Shaper Tools Origin is a Different Kind of CNCShop Blog, Techniques