Tape is a wondrous item. It’s easy to use and apply and does its job fairly well. Some types of tape, such as duct tape and electric tape, are also extremely handy and are used for a wide range of applications at home and in the workplace. One type of tape that’s also quite useful in the right situations is double sided tape — and with strong enough tape, you can repair and hold together different surfaces with ease.

Many people use tape to wrap around objects or surfaces or to hold parts together. Double-sided tape, on the other hand, is used to hold two surfaces in place together from the inside. This leaves no trace from the outside which can be much cleaner to look at, making this type of tape common for hanging pictures or fixing household items. Now you can mount and repair things around your home without leaving a trace using the highest-rated heavy duty double sided tapes in 2022. 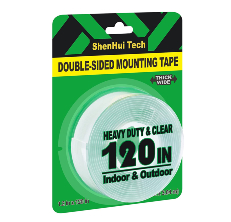 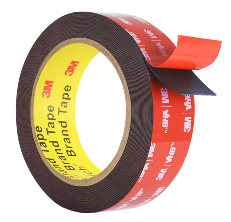 Double sided tape may not be as widely usable as regular tape, but it can be the best type of tape for certain applications. This buying guide covers what you need to know about choosing heavy duty double sided tape.

Heavy duty double sided tape is a type of tape that contains adhesive on either end of the tape and is often used for light and even heavy objects. This means that you can stick the tape on both sides and hold two items together with the tape at the same time. Double sided tape has a few different uses, which are outlined below.

Technically, it is possible to connect two items or surfaces together without the tape being visible from the outside. By turning regular tape into a loop with the adhesive on the outer side, you can create a long strip of adhesive on both ends when you push the two surfaces together with the tape in between. The problem with this, however, is that the tape won’t be nearly as reliable, with the possibility of the tape sagging due to too much pressure on the sides of the tape loop.

This task is much easier when using heavy duty double sided tape. The adhesive is applied evenly throughout the tape, and since it isn’t a loop all parts of the tape are evenly met with pressure and force. This further strengthens the bond and keeps the two connected surfaces together.

One alternative to taping two things together with double sided tape is to tape the two items on their sides. This can be quite reliable as you’re holding the items together by the areas where they move the most. However, using tape this way means that it’s very visible from the outside, and unless you have a way to cover it up the tape will be an eyesore.

Using double sided tape, you can hide any trace of adhesive as the tape would be located between the surfaces being connected. While it may not necessarily be the most reliable and sturdiest way to hold items together, it’s far more discreet, and you may value that more when it comes to taping certain items together.

Heavy duty double sided tape is sold either in transparent or solid forms. But which is better? The answer is that it depends on your needs. Transparent tape is better if the surfaces you’re sticking to are transparent, as the tape won’t be nearly as visible. On the other hand, solid double sided tape often uses stronger adhesive, which may make it better for very heavy duty applications, and is easier to spot if you plan to remove it.

Use it on the corners of surfaces

It’s always a good idea to use the tape on the corners of a surface, not on the center. Using it on the corners ensures you can hold the surface more reliably, as this prevents the item from moving anywhere at all.

Clean the surfaces before application

Tape isn’t nearly as effective when the surface is dirty, and this is especially true for double sided tape. When using double sided tape, clean both surfaces you intend to use the tape on so that no dirt gets in the way of the tape sticking properly.

The EZlifego Heavy Duty Double Sided Tape is our top choice for a few reasons. First, it’s a transparent tape, so even on surfaces that are relatively transparent, it won’t leave much of a mark and will be easy to keep hidden. Second, it’s also reusable and washable, so one roll can last you a long time as running the tape under the faucet won’t affect its grip. With surprisingly strong ductility and an easy-to-use top liner, you can reliably place the tape around your home. It’s the best overall pick for the discreet application of tape anywhere you want.

Looking for double sided tape that’s guaranteed to stick? Look no further than Gorilla’s own brand of heavy duty tape. It’s made with a flexible material that makes it ideal for use on walls and other surfaces. With enough tape, you can place and hang both light and heavy items onto surfaces without much trouble. The two-way bond solidifies in only 60 seconds, so while it’s relatively quick you can still retrieve the item from the tape if you change your mind. Be sure you’re serious about where you’re placing the tape, though, because once it’s in place the tape can be very difficult to remove.

You can’t really make use of tape without a pair of scissors or a cutter. Most people have this at home, of course, but if you’re buying tape when out of town or you don’t have scissors at home, you may need something to cut the tape with. This set of heavy duty double sided tape by Ualau comes with a cutter so you can cut the tape with it. The cutter is fairly small and can also be used on other things around the house as well, which makes the entire purchase quite the deal. This 2-for-1 package also includes tape that is washable and transparent, perfect for use anywhere in the house.

Looking to mount items on walls? This heavy duty double sided tape by ShenHuiTech is the ideal pick for those who need to hang and install devices such as pictures and hooks in a convenient spot. Other items such as charging stations can benefit from being wall-mounted, and this tape ensures they won’t fall off even months after use. The tape is very easy to use and apply, with a thickness that won’t be obvious on the front side of the mounted item. You will need to do a bit of cleaning to ensure the tape sticks, but other than that it’s a very reliable option.

While transparent tape is great, it can be quite difficult to locate when you’re doing repairs on an item. Since double sided tape is often just a temporary solution for repairs, this black tape by HitLights shouldn’t be that big of an issue. The tape can be used on LED lights and car parts and for other heavy-duty applications. It’s strong and reliable with a flexible material, so it won’t snap or break when met with resistance. While it may be a bit of an eyesore in some applications, the visibility can help when you need to make more permanent repairs and have to find and remove the tape.

A: Heavy duty double sided tape contains equal amounts of adhesive on both sides and the tape itself is often flexible enough to accommodate some resistance, making the tape quite reliable.

Q: Should I get solid or transparent double sided tape?

A: If the tape will be exposed due to a transparent surface, a transparent tape can be useful to blend in. Otherwise, there’s no problem with using solid double sided tape.

Q: When should I use heavy duty double sided tape?

A: Use double sided tape when you want to keep two items or surfaces together without the tape being visible from the outside.

Use the Best Tape Measures for Accurate Measurements