Power Up Your Toolbox With the Best Electric Screwdriver

Are you still using a traditional, manual screwdriver? Well, what if we told you there is a tool that can save you a lot of time and effort?

That’s right! When it comes to getting the job done correctly and efficiently, an electric screwdriver can be a lifesaver. The electric screwdriver is a vital piece of equipment for any workshop or garage. It's used for opening and closing nuts and bolts as well as drilling holes — and it's not just for professionals.

Pretty much anyone who likes to work on DIY projects can benefit from having one of these around. There are many types of electric screwdrivers out there, and they can be used for many purposes. They're designed to fit in tight spaces, such as between the plates on a circuit board where regular scissor blades won't work, and they're perfect for hanging pictures or installing cabinets.

Since they are powered by an electrical current, you don't have to worry about them getting damaged when they get dropped or stepped on. And since condensing your search to just one brand can be hard, we've put together a list of some highest-rated electric screwdrivers of 2022 that will save you time and money. 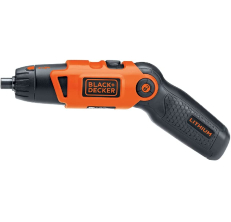 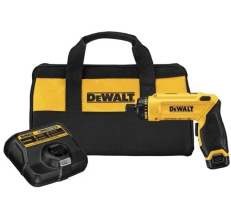 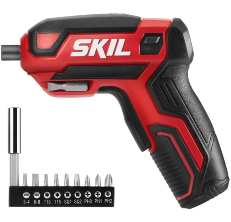 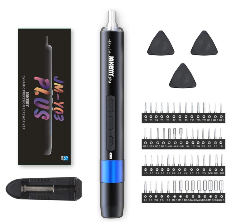 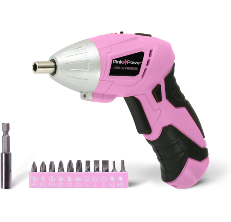 Though electric screwdrivers seem like a simple tool, the discrepancies between different models offer different values and user experiences. That said, buying the wrong model can hinder your work and make it harder to reach the tighter spaces.

What Makes a Good Electric Screwdriver?

Generally speaking, a screwdriver with a single lithium-ion battery has 3.6 voltage, which is more than suitable for most woodworking projects. The voltage and motor of a screwdriver are the ultimate power factors that decide the efficiency of an electric screwdriver.

Torque is the force by which the screwdriver can screw into different surfaces. The higher the torque, the more powerful the tool is.

The rotation speed allows you to do a specific task quickly. The rotational speed of wireless devices is from 180 to 400 rpm, whereas corded screwdrivers have a speed ranging from 3,000 to 6,000 rpm.

If you aren’t sure which electronic screwdriver will work for you, it’s better to choose one that comes with at least a one or two-year warranty. If the product doesn’t meet your expectations or some part of it breaks down, you can get free repair or replacement.

What To Consider While Purchasing Electrical Screwdrivers?

Electrical screwdrivers aren’t power tools and shouldn’t be confused with drills. One major contrasting factor is that you cannot drill holes or drive long screws into harder materials like wood. Instead, where electric screwdrivers excel in light-duty projects.

If you purchase a screwdriver that is underpowered, you won’t be able to drive screws even in soft materials or pre-drilled holes. And if you get an electrical screwdriver that is too powerful for the project and doesn’t have power settings, it might strip small screws.

An electric screwdriver has the benefit of being much more compact than an impact driver or drill. Due to its smaller size, it can operate in places where a drill just cannot.

A full-size drill's handle may be too large for people with little hands, so these smaller devices are a better option for them. The compact size of an electric screwdriver can also help with storage. You can stow a compact electric screwdriver in any drawer or container, making it ideal for the typical household.

Because of its small size and reduced weight, an electrical screwdriver is convenient to carry. The average weight of a drill is between two and three pounds, but some are significantly heavier.

The difference in weight between a one and two-pound tool may be insignificant to some people. Depending on the user, this may be the difference between being able to use the tool and finding it to be too taxing to handle. Because of this elderly people and those with medical conditions, like arthritis, may substantially benefit from selecting the lightest electric screwdriver.

It's best to schedule an afternoon for a project where your electric screwdriver has the most battery. Since the batteries in electric screwdrivers are generally built-in and not detachable, you can't use a backup battery while the primary one is charging.

These tools have a broad range of battery life. There are certain electric screwdrivers that can insert hundreds of screws on a single battery without slowing down or missing a step.
Meanwhile, some tools can only install two dozen rivets on a full charge.

Many manufacturers supply a basic kit of supplies, which is a good thing. While some kits have the most common tools there are manufacturers that provide kits with thirty or more components.
But many of those components will never be put to good use if you are a DIYer. So to play it safe, buy an electric screwdriver that features the most basic screwdriver bits.

Why Should You Buy an Electric Screwdriver?

Working with a heavy-duty tool that is both comfortable and productive is essential. Additionally, the higher speed will enable you to complete the task quickly.

Electric screwdrivers are used to ensure precise screw placement. Some models have LED lights attached to the front for better visibility.

This kind of tool is useful for a wide range of tasks. Electronic Screwdrivers may be used in a variety of settings, from your garage to your kitchen.

Reviewing the Best Electric Screwdrivers of 2022 in Detail

Designed with a pivoting handle, the Black Decker cordless electric screwdriver makes a great addition to any toolbox or workbench. The pivoting handle rotates 90 degrees in both directions, allowing you to operate the cordless screwdriver in tight spaces. It features a 3.6 volt motor with a speed of up to 180 RPM to tackle different types of projects.

While a forward-reverse slide switch allows you to easily change screwdriver direction, its spindle lock feature offers added comfort and greater control while working. The best part is it is equipped with a 3.6 lithium-ion battery that can last for two to three hours once charged.

With its compact, lightweight design you can easily bring this cordless screwdriver with you wherever you want.

The DeWalt Gyroscopic Electric Screwdriver is another convenient tool for professionals and hobbyists alike. With its motion-activated variable speed with a max of 430 rpm, it glides through different surfaces like wood, plastic, and light gauge metal easily. The best part about this is its gyroscopic feature that allows you to adjust the direction of the tool – either inline or pistol grip – according to your working preference and project at hand.

Additionally, it is equipped with an LED light that illuminates the work area for better visibility in confined spaces or low-light areas. With its quick-charging battery, it will be good to go in about an hour.

An additional bonus is that it lasts for longer than most standard battery-powered screwdrivers.

SKIL Rechargeable Electric Screwdriver is designed to complete smaller DIY-ed projects. It features a high-performance motor that delivers a maximum no-load speed, and its ergonomic design makes it easy to grip and use. Additionally, it has a spindle lock feature that gives you control over your device when the speed trigger is released. With this machine, you will get various interchangeable bits with one special magnetic tip that holds the screw in place while working.

It has variable speed settings, so no matter what project you’re working on or how much force is required you can rest assured you can get the job done. The screwdriver comes with a USB charging cable, so you can charge it up as needed and then put it to work. Whether you need to make small repairs or build furniture, this screwdriver offers the flexibility and power to complete the task.

JAKEMY Electric Screwdriver is the one if you want automatic and manual functions. The automatic mode works with a touch of a button while the manual mode offers six different speeds – that way, you can adjust the torque according to the project.

This precision power screwdriver kit comes with 56 different bits so you can choose the perfect bit for whatever project you are working on. Featuring an LED light feature, you can see exactly what you are doing without having to pause or switch tools.

With its rechargeable lithium battery, this electric screwdriver can run for three continuous hours once charged and last up to 180 days on standby mode. It also has an exquisite pocket-friendly design, so you can easily carry it anywhere.

The Pink Power Electric Screwdriver is the perfect addition to any toolbox. Built with durability in mind, this screwdriver has a strong plastic housing and can withstand heavy daily use. This powerhouse provides enough power for the toughest of jobs without being too large or heavy. With a lightweight design and rubberized grip, this drill is perfect for jobs around the house and DIY projects. Its powerful battery holds a charge longer than most other electric screwdrivers, so you will never be left with half-finished work due to a dead battery.

Featuring a pivoting head, this driver also has a built-in LED light that illuminates the area where you are working so you won’t have to strain your eyes. If your battery starts running low, the built-in indicator will let you know so that it doesn’t leave you hanging when you need it.

This particular model is designed to be compact, making it more portable and easier to store when not in use.

Q: What’s the minimum torque that a cordless screwdriver should have?

A: If you are a DIYer and need a screwdriver for home repairs and personal use, a device with 3.6 volts and a torque of 5 Nm is a good choice. If you’re a professional, get a screwdriver with at least 7.2 volts and 15 Nm torque for hassle-free application.

Q: Is a drill and electronic screwdriver the same?

A: Not at all. Drills usually have a chuck that opens and closes around the bit, whereas an electric screwdriver has a sock that is only compatible with driver bits. Also, while drills are used for heavy-duty and industrial-grade projects screwdrivers just screw or unscrew the rivets.

Q: Can my cordless screwdriver drill a hole in a wood plank?

A: No. Electrical screwdrivers are not made to drill holes in harder surfaces. If you want to screw a softer surface like rubber or plastic, then you can count on your cordless screwdriver. 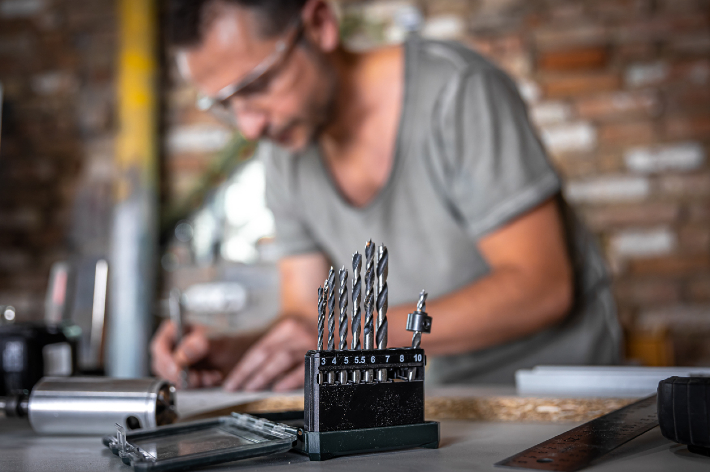 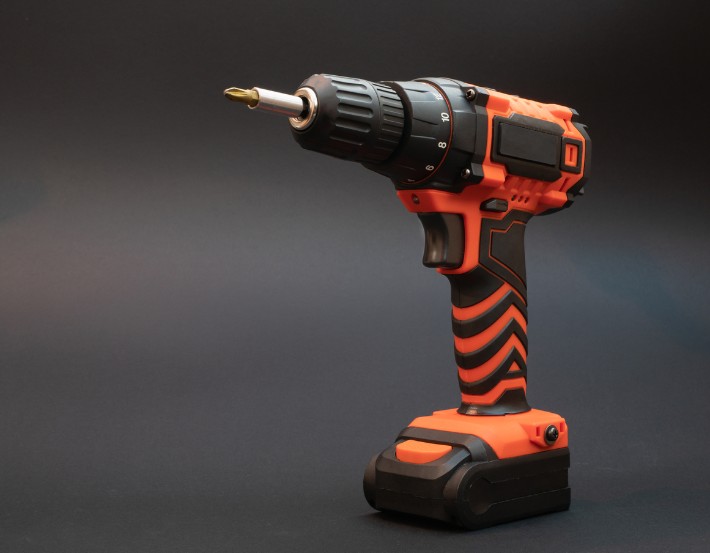 The Best Cordless Drill To Complete Any Job 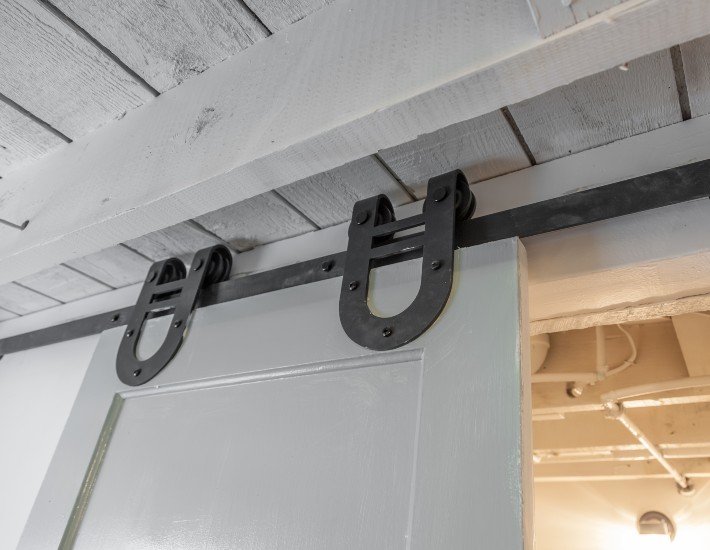