Work With Ease and Comfort With the Best Cordless Angle Grinder

When most workshop guys think about grinders, they picture the hand-held angle grinder. This multifunctional power tool can be used for many tasks, including cutting iron tubing to repair a damaged valve, carving wood to make furniture, tile cutting for a backsplash, and cleaning grout between tiles.

With technological advancement, professional power tool usage is rapidly shifting to cordless power, and as a result, cordless angle grinders are becoming more popular. The ability to work autonomously from a steady power source is highly desirable. It means you aren’t bound to wires or power cords and can readily access difficult-to-reach workplaces. Whether working with wood, metal, or stone, an angle grinder wheel will make your life significantly easier.

If you are ready to add this versatile tool to your toolbox, we have reviewed and compiled a list of quality cordless angle grinders for 2022 to help you get the desired results. 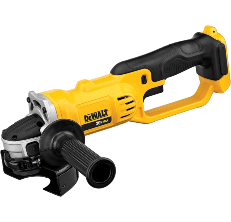 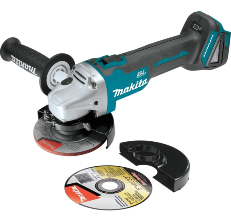 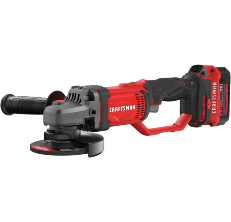 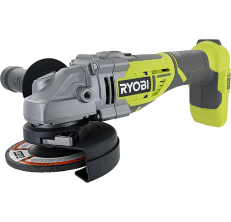 Finding Your Next Cordless Angle Grinder: A Buyer’s Guide

When it comes to purchasing a cordless angle grinder, everyone has different requirements. Some people prefer their grinders to be as strong as possible for heavy-duty work, while others prefer them to be ergonomic and comfortable to work for extended periods. You will need to consider these things to determine which grinder is ideal for you. So, here are some features of a cordless angle grinder and how they affect performance.

Factors To Consider When Buying a Cordless Angle Grinder

Angle grinders are available in various sizes, each identified by a number representing the largest diameter of grinding disc or wheel that it can manage. A 4, 4.5, or 5-inch disc will work for the majority. Since bigger discs might be cumbersome or time-consuming, smaller sizes and weights are preferable for DIY projects.

In industrial settings, professionals typically utilize larger discs (up to nine inches) when cutting through thick chunks of material. Discs larger in diameter require grinders that can withstand greater cutting forces. This means you’ll use a heavier tool that’ll wear on your hands faster than a compact angle grinder.

The rpm of an angle grinder is the standard for describing its speed (rpm). Some powerful grinders can reach speeds of 12,000 rpm, while most operate at a lower range of 5,000 to 10,000 rpm. But, the rpm number is under “no-load” conditions, which means the disc is not grinding or cutting anything but is simply spinning in the air. When the disc starts cutting or grinding, the speed drops dramatically.

A higher rpm indicates that the tool is capable can cute material with greater ease and speed, but there is an increased risk of injury due to the disc’s potential to rupture as it heats up at faster speeds. Pay attention to the disc’s maximum supported speed and use the appropriate disc for the job. For instance, if you run a disc that is only supposed to withstand 7,500 rpm at a quicker speed, it may shatter and send pieces of the grinder wheel flying.

The power output potential of angle grinders is measured in volts (V) and amperes (A) (amps). The power of a cordless angle grinder’s battery is measured in volts. Most cordless models have 18-volt or 20-volt batteries, but some have 7.5-volt or even 24-volt batteries. Most cordless power tools have a “magic number” of 18 to 20 volts, which is the best mix of price and usefulness.

The angle grinder’s guard is a very important safety feature covering half of the disc. Its job is to protect the user’s hands by stopping sparks and other debris from flying at them. It also keeps surfaces from getting damaged when working in tight spaces.

The guards on some angle grinders are movable, whereas, on others, it is permanently attached. The adjustable model is preferable because it can shield the user from projectiles in either direction and is useable with either hand. But, if the bolts aren’t secured, a removable guard could come loose. In contrast to removable guards, fixed guards are more secure and won’t fall off using a grinder.

Angle grinders might recoil slightly on starting up because they are quick, strong tools. This is especially true if the wheel is big and heavy. The motor’s recoil can cause the angle grinder to jump in the user’s hands, leading to possible serious injury. Soft-start technology decreases the output power to the motor initially, gradually rising until the grinder is fully operational. This power regulation reduces the jolt to the user’s arms and wrists and keeps the grinder from recoiling during start-up, improving safety.

Porter-Cable’s Cordless Angle Grinder’s maximum rpm is 8,500, and it’s fantastic for most applications. The gear housing is made of sturdy cast metal, and a spindle lock mechanism facilitates quick and simple wheel swaps. So, you won’t have any trouble switching wheels at all, even if you’re just starting. The three adjustable locations of the tool’s side handle maximize its effectiveness. Its over-molded, curved handle is ideal for comfort and sustained use. It has two grinding and cut-off wheels and requires only 20 volts to function. Your budget will thank you for not having to buy wheels individually. Its maximum 8,500 rpm, adjustable handle guard, spindle lock mechanism, and two included wheels make this product the best on our list.

This DeWalt Cordless Angle Grinder is a great option when you need an angle grinder for heavy use because it is very powerful and can be used for many different tasks, like grinding and cutting. It does an amazing job of cutting angles and has a quick wheel release that lets you take the wheel off without needing to stop and use a wrench. This will preserve your effort, save time, and make it simple to go from one job to another without stopping. Thanks to the two-finger trigger switch and lock-off button, it features easy activation and better gripping. Two-position side handle provides enhanced control, comfort, and adaptability.

If you want optimum performance from a cordless angle grinder, you should check out this angle grinder from Makita. It has a brushless motor and an 18-volt lithium-ion battery, giving it a top speed of 8,500 rpm. Its automated speed regulation allows it to work with both 4.5-inch and 5-inch discs and keep up with even the most demanding cuts and grinds. The rubber over-molding on the grip and handle and the lock-on switch greatly reduced vibration.

This model includes automated speed change technology, which allows you to modify the torque and speed while operating. It is equipped with active feedback-sensing technology (AFT), which immediately turns off the motor if the wheel rotation is abruptly stopped.

This Cordless Angle Grinder from Craftsman offers a shielded D-shaped handle for comfort and safety. The brushed motor can spin 4.5-inch discs at 8,500 rpm, which is excellent for most light-duty applications. The angle grinder has a thumb-activated safety mechanism and a big paddle shifter for comfort and safety.

It doesn’t come with a battery, but it works with the Craftsman V20 battery line, so if you have other Craftsman tools, you can use the batteries you already have and save money. The handle and case are contoured to accommodate your natural hand posture, reducing strain when used for extended periods. On top of that, the gear housing aids heat dissipation for extended periods of use.

The Ryobi Cordless Angle Grinder has many advantages over more standard cordless power tools, including a 60 percent increase in run time. You can cut or grind through almost anything with up to 10,400 rpm and increased power and motor speed. Its three-position handle and adjustable guard make it easy to use on practically any work surface, regardless of how oddly it’s positioned. Even better, the guard is adjustable without tools, making it easier to make quick adjustments. The rubber over-mold grip on the back will improve your hold on the item no matter how slippery the surface.

Q: What is the average battery life of an angle grinder?

A: Generally, the most powerful grinder combined with the cheapest and smallest battery packs will only last for about two to three hours at the most.

A: Yes. Angle grinders can make clean cuts in wood because of their power and capabilities.

Q: What amperage level is ideal for my angle grinder?

A: Mid-range angle grinders typically have a power rating of five or six amps but can reach 11 amps in extreme cases. Since most normal electrical outlets can only give up to 15 amps, even the largest versions have a practical limit of 14 amps. 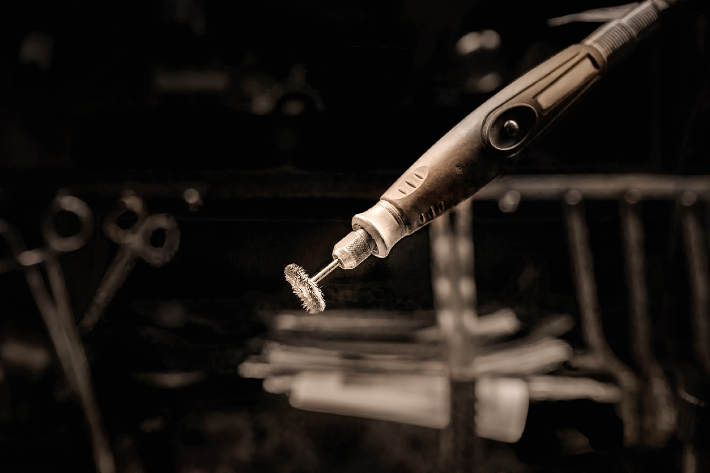 Make the Most of Crafting With the Best Cordless Dremel 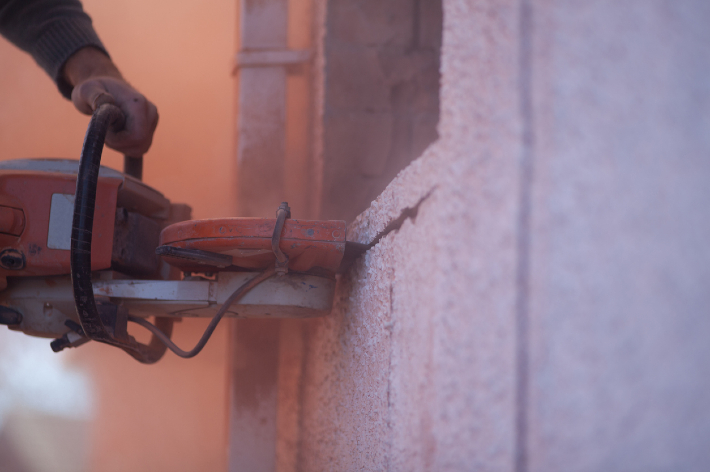 The Best Electric Concrete Saw for the Toughest Jobs 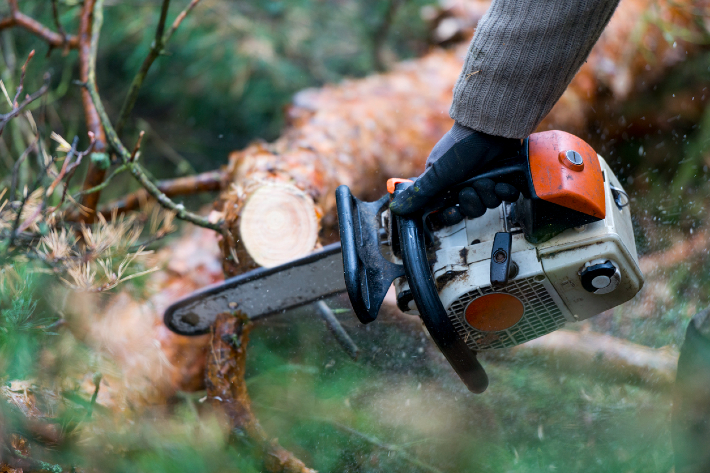