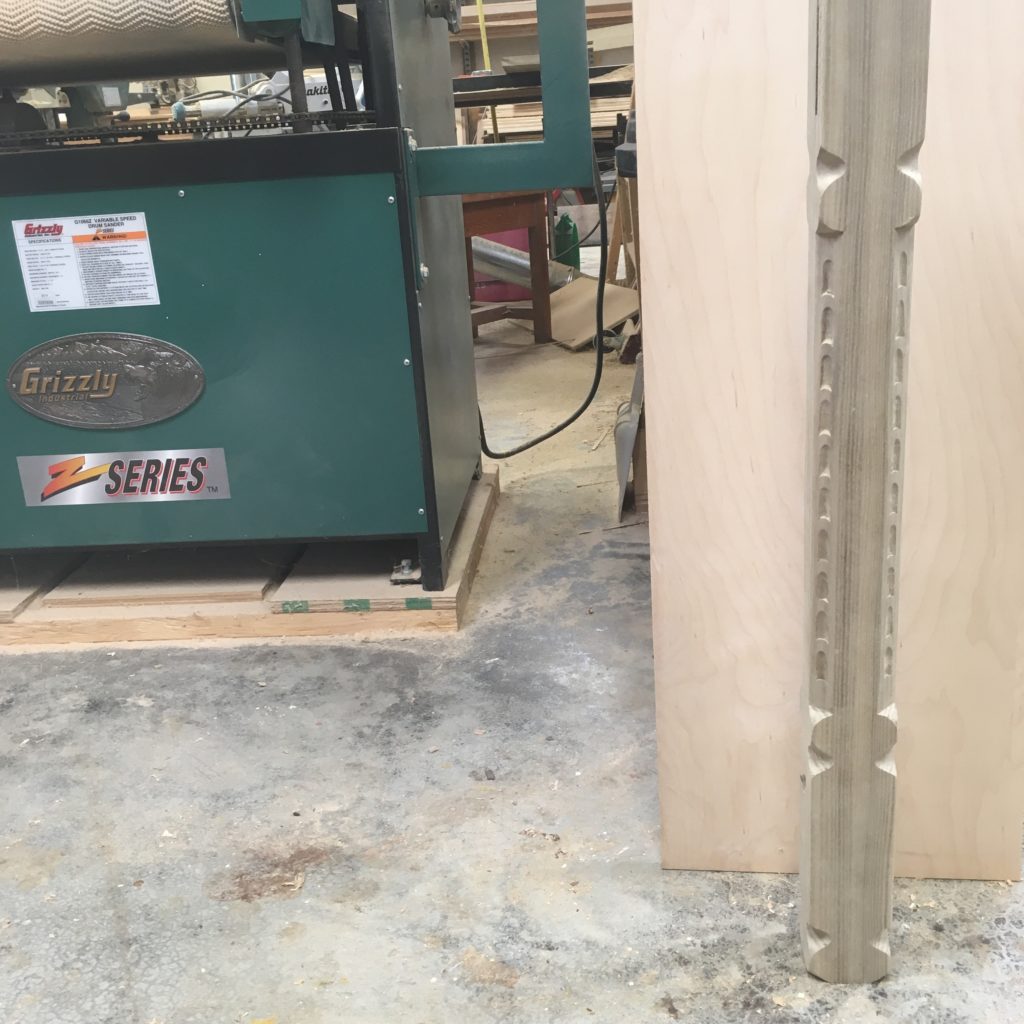 Many pieces of English Arts and Crafts furniture, especially those of the Cotswolds school, feature a cheerful detail known as decorative gouging. It’s a simple technique and amenable to endless variations depending on the combination of gouges used, the spacing and depth of elements, and so on. Here’s an introduction based on the legs for a hayrake table.

Decorative gouging gains as much of its effect from its context as from the gouging itself. It appears most often on, or near, the edge of a table top, leg, or gallery rail; the crispness of the edge forms a border that’s integral to the design. In many cases, the gouging is done on a chamfer. In cases where there is no direct edge bordering the carving, such as Christopher Vickers’s reproduction of an Ernest Gimson table, the edge is defined by a routed line.

The hayrake table I’m currently building is based on a drawing by Gimson from 1908. The original drawing indicates chevron inlay on the chamfered sections of the legs and specifies that “decorative gouging” may be substituted. I decided to use gouging on my table because I thought it would look striking in the curly sassafras.

Begin by choosing your gouges. Depending on the look you’re after, you may use one gouge or two. Some of the most appealing examples of gouging I have seen are made with an elongated tail, which gives an almost animal-like appearance; the pattern puts me in mind of a school of tropical fish. 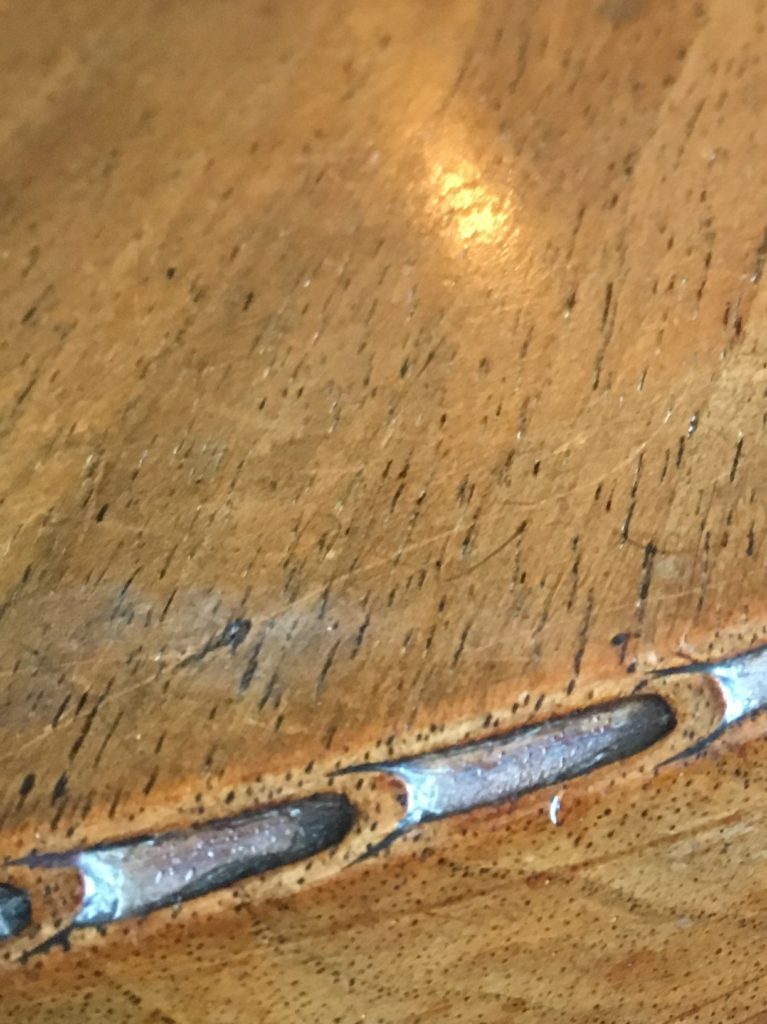 An example of decorative gouging in an original English table. Here the tails are exaggerated and the bodies are long and thin.

Experiment on a piece of scrap to determine the spacing between the gouge cuts and the distance from the defining edges (or routed borders). Once you have your spacing figured out, make a template. Be sure to mark which direction is up, and make a point of paying attention to this each time you lay out a new part; it’s easy to get lost in the process and forget the big picture until it’s too late. 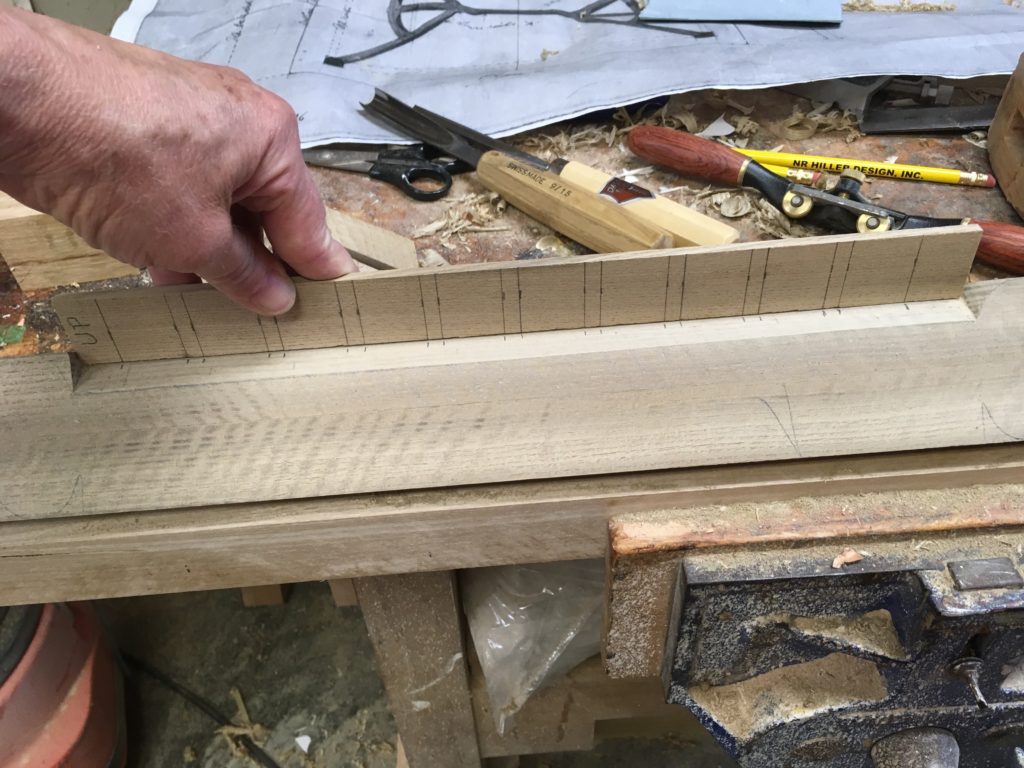 Gouging template. Note the word “UP” at far left.

The double lines indicate the spacing between the head of one gouge cut and the tail of the one it’s following.

After you transfer these marks onto your work piece, mark it to indicate the center. You can either draw a pair of lines at the outside edges of your desired pattern or just one line in the center. 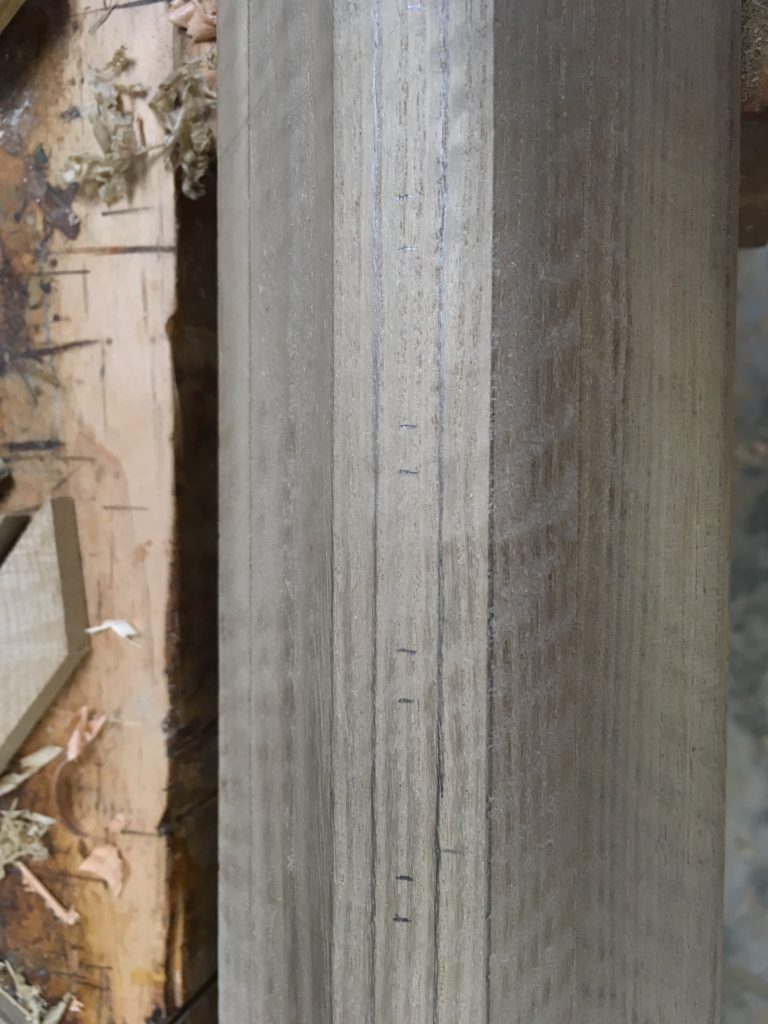 I roughly traced the edges of the chamfer using my finger to guide the pencil line. My gouge cuts will go between these lines.

Clamp the work piece to your bench. Because this one is an octagonal leg, I made a mitered cradle to hold it flat and used a piece of scrap with a mitered notch to clamp the leg to the cradle, which is held in the vise. 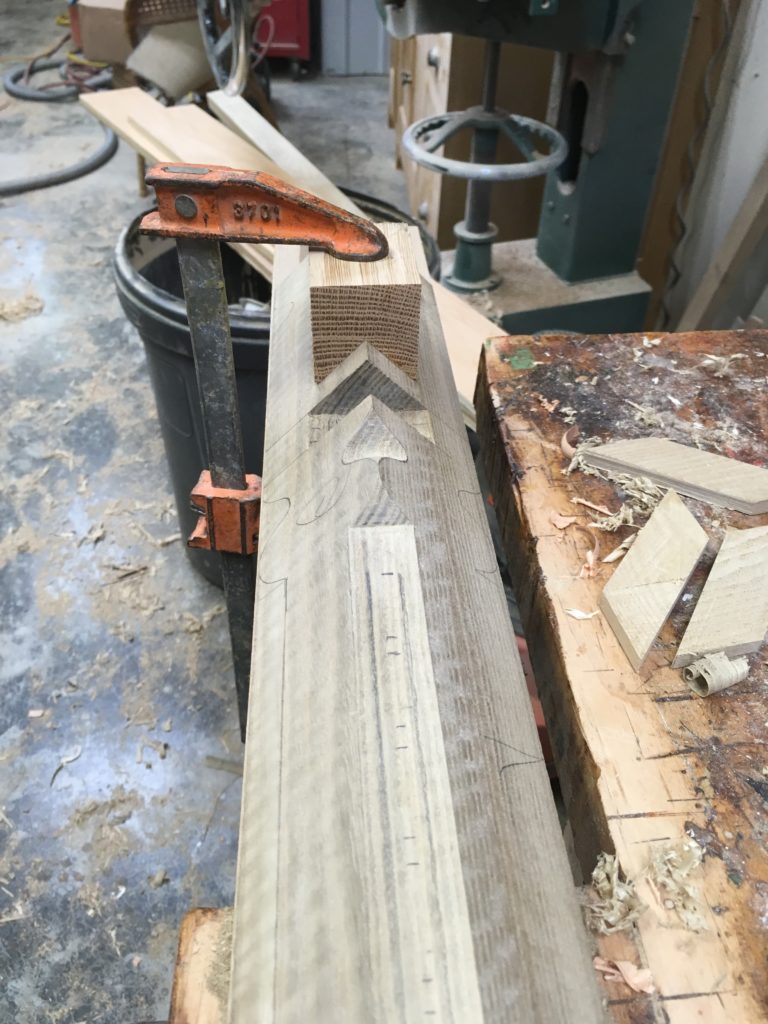 Define the tails by holding your first gouge perpendicular to the work piece and chopping straight down. In sassafras, this took three gentle blows of the mallet to get the depth I desired. Don’t worry about getting every cut lined up perfectly. All of the historic examples I’ve seen, as well as the gorgeous reproductions by Vickers, are slightly imperfect. It’s this subtle variation that gives the pattern life. 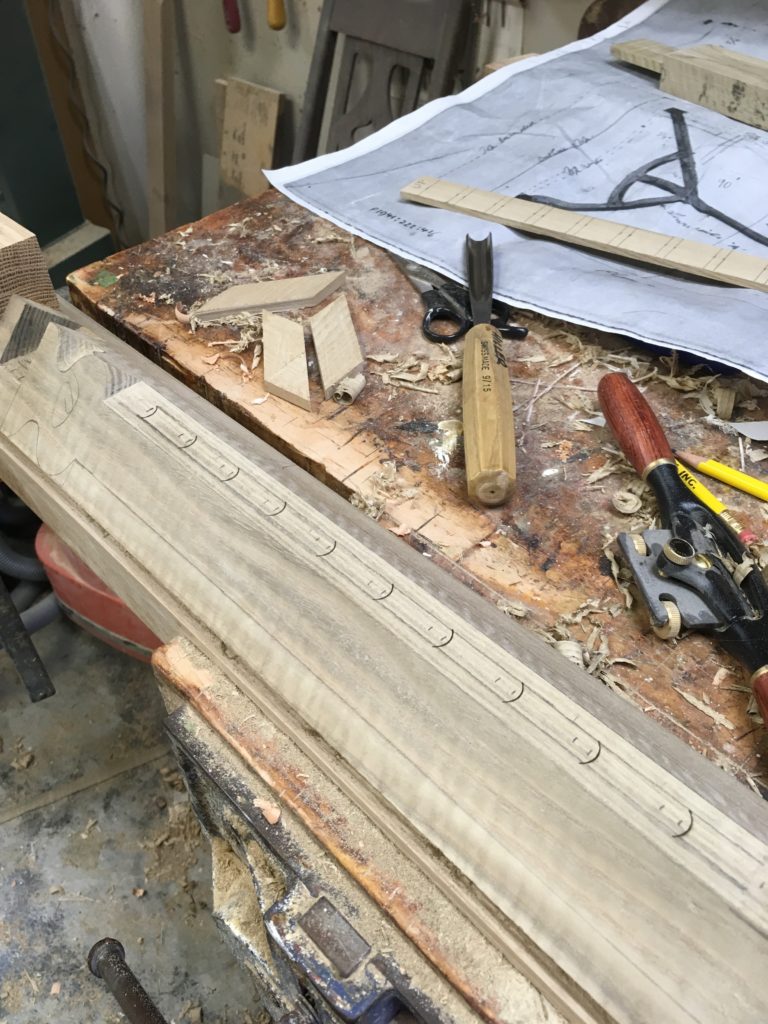 The first cut defines the tail.

Now get your second gouge, if you’re using two different sizes, and carefully chop out the body of each fish. I did this with my mallet, but I had to put it down to take the picture. I made these cuts in two passes; this allowed me to remove the bulk of the material first, while gauging the character of the grain in an effort to avoid tears. Use the rounded edges of the gouge to slice cleanly through the fibers on the second pass, again to avoid tearing the grain. I did this by gently rocking the gouge from side to side as I moved it through the fibers. 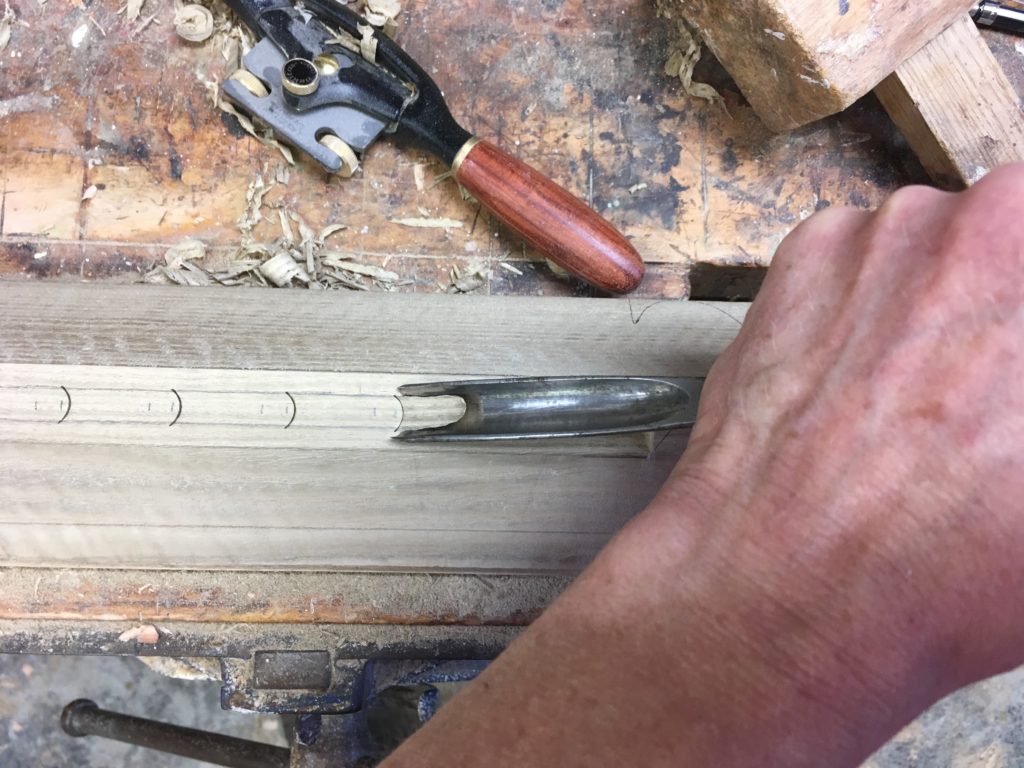 The second step defines the body. 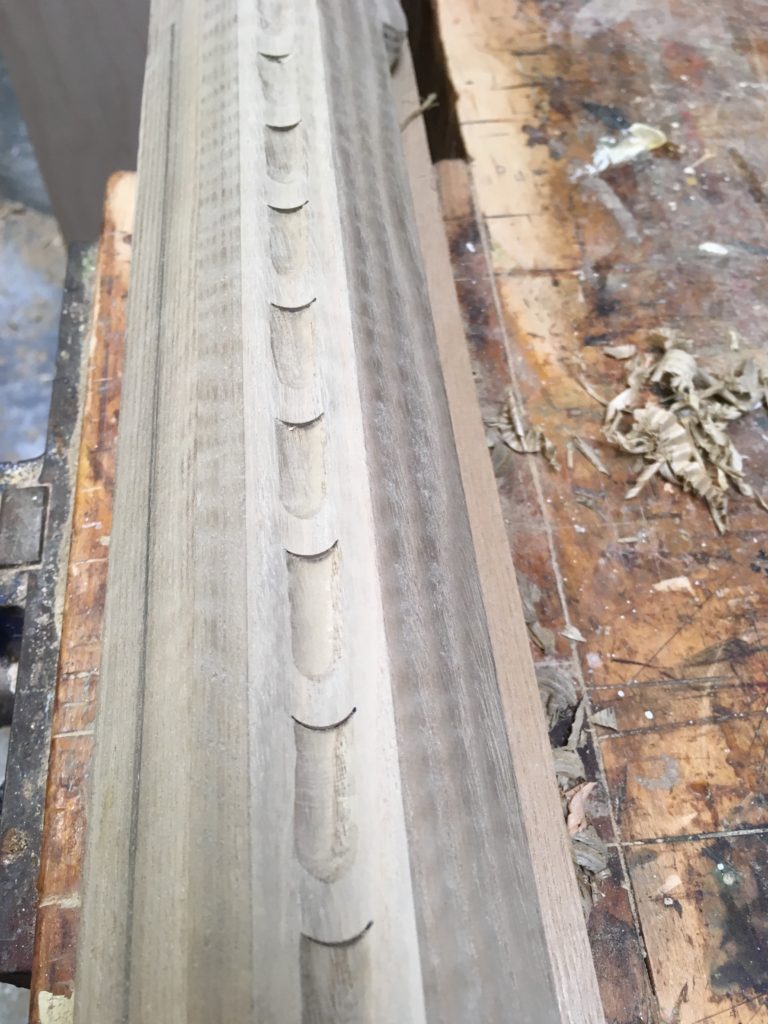 Nearly there. The pattern is basically done and just needs a bit of final tidying up. 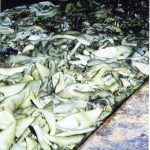