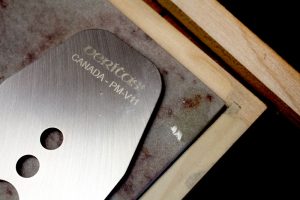 Unlike many hand-tool woodworkers (and turners), I’m not much of a steel nerd. I’m not on a quest for the steel that promises the ultimate in edge life.

The reason I’ve not experimented with lots of exotic steels is that every time I used CMP-10V, CMP-3V, D2 or whatever I found that these steels achieved their hard-wearing properties at the expense of two other important characteristics of tool steel: how easy it is to sharpen on traditional equipment, and how keen the edge could get.

In fact, I have always found A2 a little annoying because it takes a long time to sharpen it on oilstones, which is the sharpening medium I used for many years before A2 became common in woodworking tools. So about a decade ago I switched to waterstones, which sharpen A2 quickly. Waterstones are messy and wear quickly, but I found the mess to be worth it for the extra edge life I get with A2.

Soon, however, my oilstones might be seeing some more use.

Unlike me, Veritas of Canada has been searching hard for a tool steel that is durable, takes a keen edge and is easy to sharpen. And according to company officials, Veritas has found it.

It’s a proprietary powdered metal the company is calling PM-V11, and after years of testing it and investing $250,000 in the process, Veritas will soon be offering the steel in its planes, chisels and even aftermarket blades. 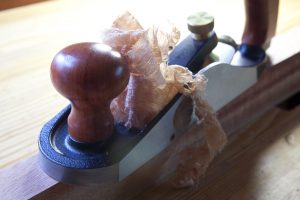 Since March 2012 I’ve been testing a plane blade made from PM-V11 in my shop in side-by-side tests with A2 and O1. I’m writing a short article on my results for a fall issue of Popular Woodworking Magazine, so I’m not going to spill the beans on its plusses and minuses here in the blog. I’m afraid you’ll have to wait.

But I did get a chance to interview Robin Lee, president of Veritas and Lee Valley Tools, about the steel, and I got a peek at the web site (pm-v11.com) that the company will be launching soon that explains the story behind the steel and contains some of the company’s testing data.

The story of PM-V11 begins with A2 steel. Veritas was an early adopter of A2 for its line of bench and block planes, but Lee says he was always sensitive to the trade-offs for the user.

“A2 is problematic for oilstone users because it’s a little more difficult to sharpen,” he says. “I think people give up too quickly when they sharpen A2 and don’t get as good an edge as they could.”

When Veritas set out to launch its line of chisels (the O1 versions have been released already), the company decided to take a long look at steel technology to see if it could find one or two different steels to use for these long-awaited tools.

The company winnowed down a long list of potential tool steels to 21 kinds (some of the steels were identical but heat-treated differently). Then the steels were coded and evaluated using a blind test so the researchers did not know which steels they were using.

The blades were all sharpened to the same point and then submitted to a series of tests.

Impact: Veritas engineers built a jig that simulated the chopping action of a woodworker hitting a chisel into a piece of oak. After a number of strikes, each edge was photographed under high magnification to find edge failure (the company took more than 6,000 photos, Lee says). The test was repeated using four different micro-bevel angles. For impact-resistance, the PM-V11 outperformed all the other steels in the test, including M4, A2 and O1.

Wear-resistance: Again, the Veritas engineers built a jig that simulated planing or paring a piece of MDF, which is a mash-up of wood-like particles and glue. Nasty stuff. After planing 100’ of MDF, the blades were photographed. This test was done using three bevel angles for each steel. The PM-V11 outperformed all the other steels in the test except one (which was undisclosed), including M4, A2 and O1.

Sharpenability: This test was a little more complex than the other two. To measure sharpenability, the engineers created a procedure where the blades were sharpened in a honing guide that was held down with a 4.1 lb. brass weight. The blades were sharpened on several media. After a set number of strokes, the edge was examined with a profilometer, which measures surface roughness. When the surface stopped improving on that grit, it was moved to the next finer grit. So the engineers were measuring how quickly you could move up in the grits when sharpening. In this test, PM-V11 outperformed all the other steels except O1.

For those of you who are data-diggers, Lee says the company will be releasing some, but not all, of its test data.

So why is the PM-V11 steel so superior? Part of the equation is its manufacturing process. It’s one of the “powdered metals,” which have become an important part of industry during the last 40 years.

Traditional steels are mixed with their alloys and poured into moulds to create ingots. When the steel hardens, the alloys and iron form a matrix and tiny carbides (very hard particles) are produced. Getting a good distribution of the alloying materials and carbides is the challenge to getting a good steel.

With powdered metals, the process is more complex. The liquid metal is turned into powder by pouring it through pressurized gas. The resulting fine powder is sifted and then perfectly blended to ensure even distribution of all the ingredients, put into a mould and then heated under pressure, creating a solid billet of steel.

“It’s like a perfect pancake mix,” Lee says. “You get a very consistent formation of carbides.”

In addition to being easy to sharpen, long-wearing and resistant to impact, Lee says the PM-V11 also has other good qualities. For one, it can be sharpened at low bevel angles (as low as 15°) and work very well. One of the downsides to A2 is that it tends to chip at bevel angles lower than 30°. The PM-V11 is also more corrosion-resistant, Lee says.

But what about the cost? PM-V11 should cost about 30 percent more on average, depending on the tool. If the cutter has to be reduced in thickness during manufacturing, the price could be even more because the powdered metal has to be machined at half-speed.

The other challenge, Lee says, is maintaining the company’s stock of the steel. There is a six- to 12-month lead time when ordering the steel from the maker. So Veritas has to watch its stock and plan carefully. But even with all those challenges, Lee says he and the company are excited about the steel.

“We tried to find the sweet spot for woodworkers,” Lee says. “Using your same equipment, we wanted you to get performance without the extra maintenance.”

Soon we will all find out. Veritas is releasing PM-V11 plane blades shortly. Then the chisels. And after that, PM-V11 mortise chisels. 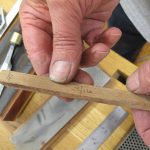 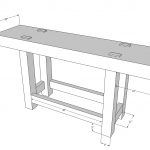