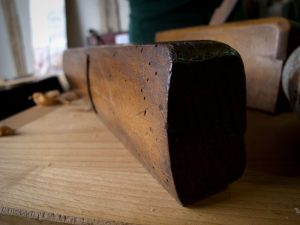 When preparing stock by hand, the most useful plane is probably the jack plane (sometimes called the fore plane among joiners). Its curved iron allows you to remove a remarkable amount of material with every stroke.

I usually travel with a metal jack (an old Stanley No. 5) because it’s less intimidating in a classroom than demonstrating with a wooden-bodied plane. But I do have a wooden jack that I’ll use at home for my own work.

This week while in England, woodworker Richard Arnold showed me one of his 18th-century jacks that had a rounded sole that matched the rounded iron.

He said the plane is English and dates from the mid-1700s, based on its construction details, including its tote, which is offset from the centerline of the wooden stock. The plane had an Ibbotson iron with no chipbreaker. 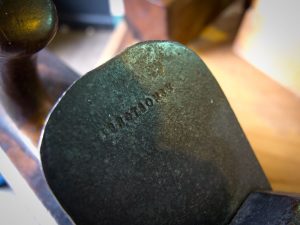 Richard, who also collects tools relating to joinery and sash work, said he has seen this rounded sole on early jacks before, though it is not common. Getting Bit by the Toothed Planing StopShop Blog