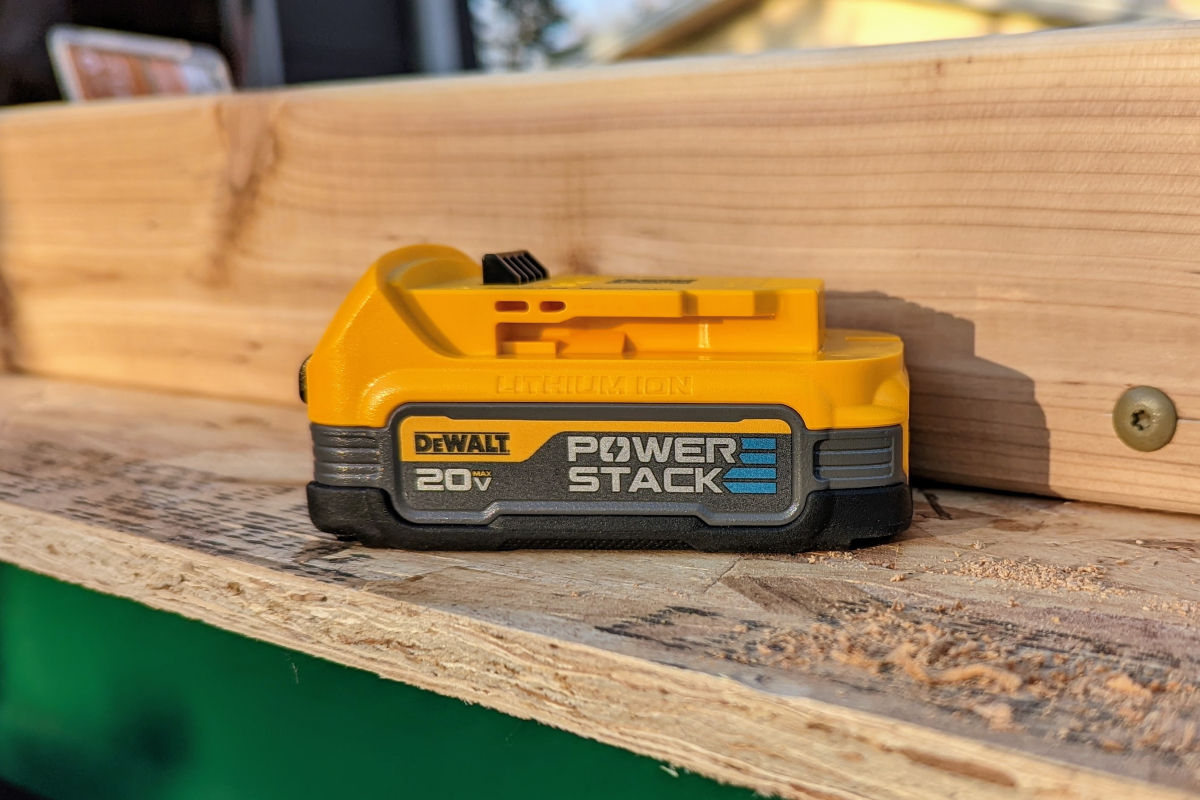 The staff here at Popular Woodworking just wrapped up a 12v drill competition that will appear in the August issue of the magazine. This is the first time we’ve done a drill comparison since 2009, and not to spoil anything, but the drills of today absolutely run circles around the ones of yesteryear, and it’s not even close. I know it won’t be another 13 years before we run that sort of comparison again and the big reason is battery tech. Modern batteries are more efficient, more intelligent, and more reliable than ever before… but the new PowerStack might render them all obsolete.

The stats on the new DeWalt PowerTech 20v battery are impressive on paper; 25% more compact, 15% lighter weight, 50% more power, and double the expected battery lifetime of their standard 2ah 20v battery. How does all of that happen though? It’s all in the shape of the power cells inside the battery. Most batteries feature cylindrical power cells; almost like a bunch of AA batteries arranged in the pack. The more cells a battery has, the higher the amp-hours. DeWalt is using flat cells – almost like a cell phone battery – instead. As you can see below, there’s no wasted space between the cells.

Is it all smoke and mirrors though? Can the PowerStack really do everything it claims? And how can a battery that’s rated at 20v and 1.7ah have 50% more power? Off the bat I can tell you that the PowerStack is lighter and smaller than a normal DeWalt battery, no doubt. What about the power claim? That takes some clarification. Each cell in a battery has a limited amount of power that can be drawn from it at a time. This is a big part of the reason certain tools should use batteries with a high amp-hour rating. Yeah, your miter saw will run on a 2ah battery, but it’s going to put the battery through heck to do so. DeWalt engineered the cells in the PowerStack to increase power delivery by 50%.

Think of it like a drinking straw- you’re capable of generating the same amount of suction regardless of the straw size- but you’re able drink a lot faster with a big gulp straw instead of a cocktail one. The PowerStack’s cells are that big gulp straw- they can pull 50% more power than an equivalent cylindrical cell pack. This means the battery is capable of performing at the same level as a much much larger battery pack without stressing the cells.

The irony of this efficient power delivery is that the calculated amp-hours suffers as a result. Going back to that straw analogy, even if the size of each glass is the same, you’re going to finish your drink a lot faster with the big straw. You won’t notice the battery life difference on something like a drill per se, but throw the PowerStack on your miter saw and it’s going to work really well for a (relatively) short period of time.

So why can’t I absolutely declare PowerStack the future of battery tech? Well I don’t have a crystal ball, so I have no way of knowing if another tool manufacturer is about to drop another game-changer like a solid-state battery or nuclear fusion. And I don’t know if the claims of double the lifetime will play out under actual usage. But I would suspect that by the time we conduct an 18v drill test, DeWalt won’t be the only one using flat pack battery technology. How to Use a Plow PlaneTools