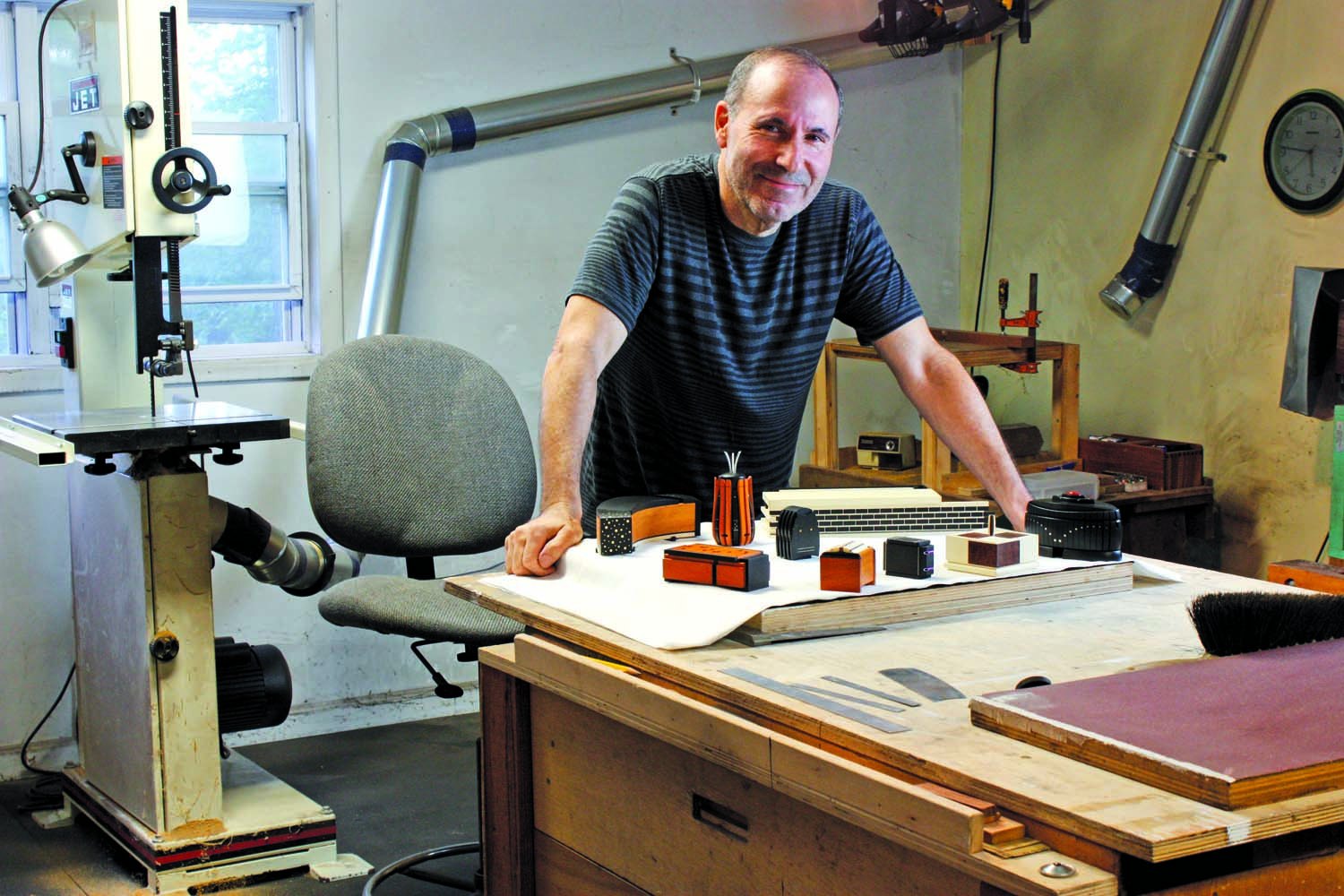 You could take the entire annual output of Phllip Weber’s woodworking shop and fit it into the trunk of a VW bug. But oh, what a wondrous load you would have: Ebony, holly and Osage orange. Brass, aluminum and copper. Influences from Art Noveau, Art Deco and Asia. Geometric shapes and others so unique they’re nameless. Indeed, Phil’s boxes are as rare and intricate as the jewelry and gems they often hold.

Phil, who was born in Queens, New York, attended two years of college and then went to vocational school to learn the farrier’s trade. He didn’t shoe many horses, but discovered a love of working with his hands and the “magical material” he’s crafted ever since. Reading James Krenov’s books and the then, upstart Fine Woodworking magazine were other sources of inspiration. 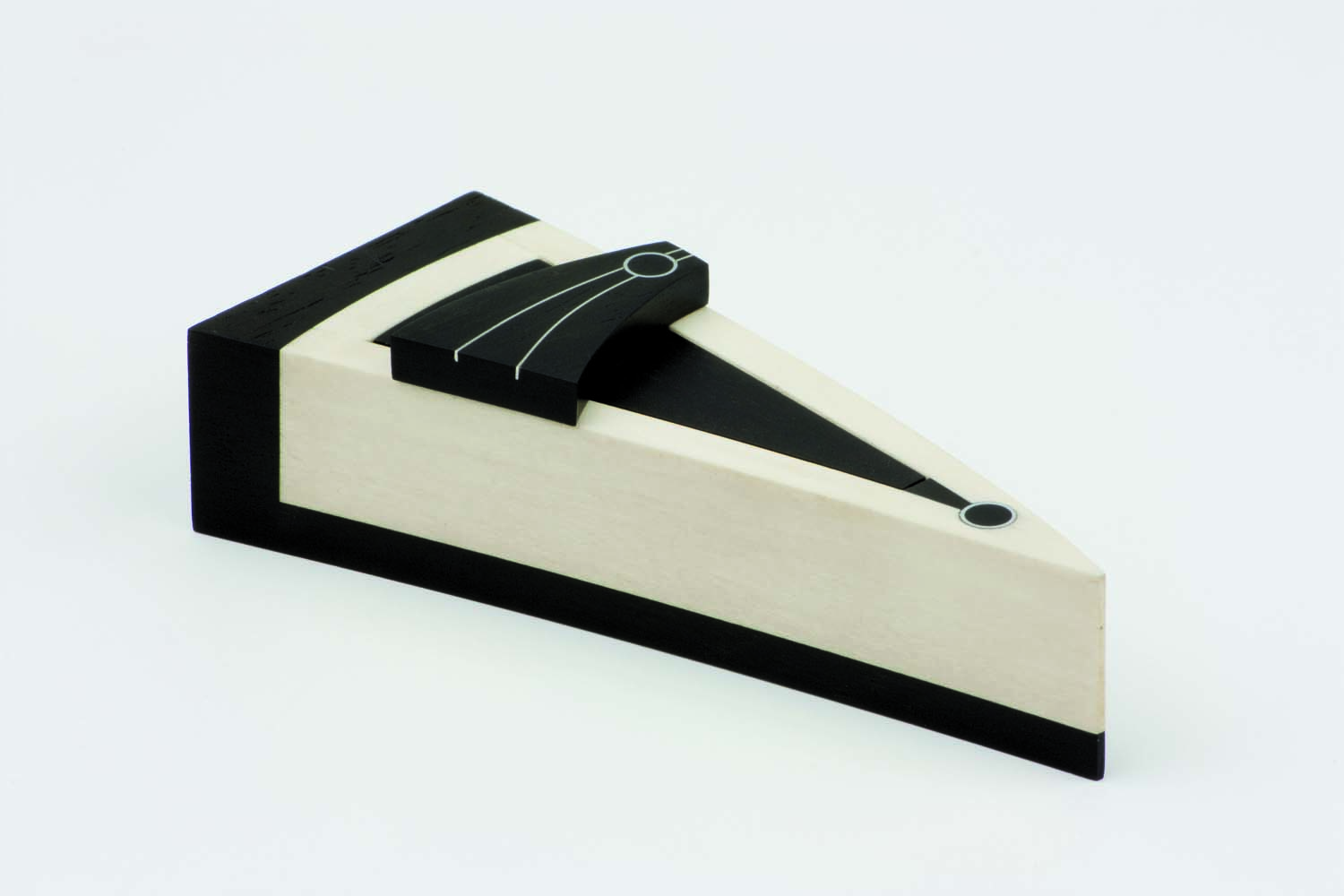 The first few years of Phil’s woodworking career were lean. “Initially I used lots of veneers from Constantine’s because that’s all I could afford,” he recalls. Phil and a partner crafted jewelry and other 1970s-type paraphernalia and sold their wares through craft fairs. As his work became more sculptural and collectible, Phil began selling though galleries. But today, things have come full circle: This “almost 60-year-old” craftsman now sells most of his boxes and garners most of his orders by attending a half dozen high-end craft fairs per year. Phil develops about 10 new designs and builds between 100 and 150 boxes per year, most of which sell for between $300 and $1500. He keeps photographs, templates, parts and dimensions of completed works so he can closely replicate them upon request. 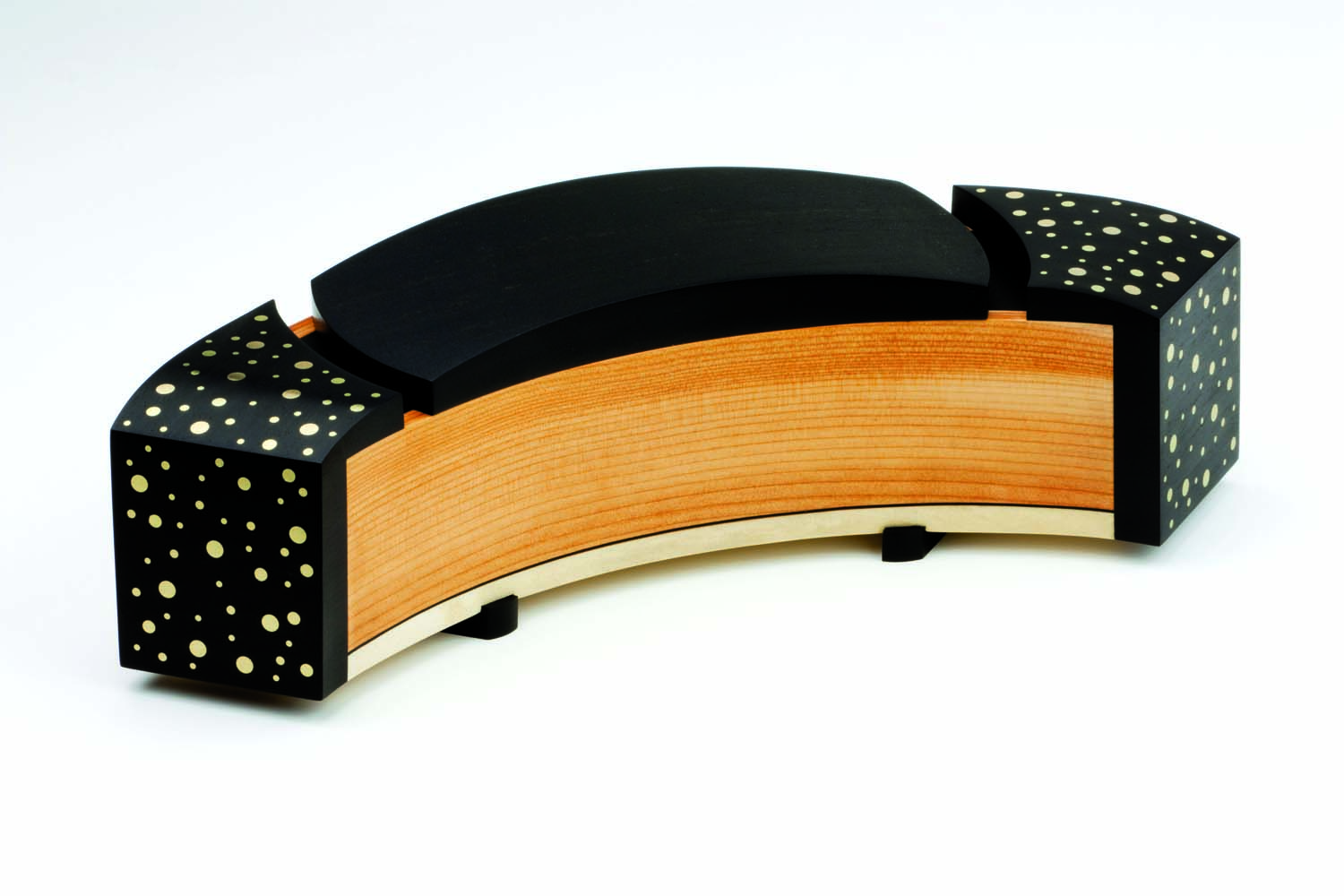 Phil’s design process is evolutionary, rather than schematic. “I’m not a great chess player,” he explains. “I can’t see eight moves ahead, so I design as I go.” Sometimes a design starts with a particular joint Phil wants to try or a particular wood he’d like to use. After determining a basic shape and size, he ponders whether the box should stand on legs. Inlays, hinges and pulls evolve along the way. Art Deco and Asian influences pervade much of his work. 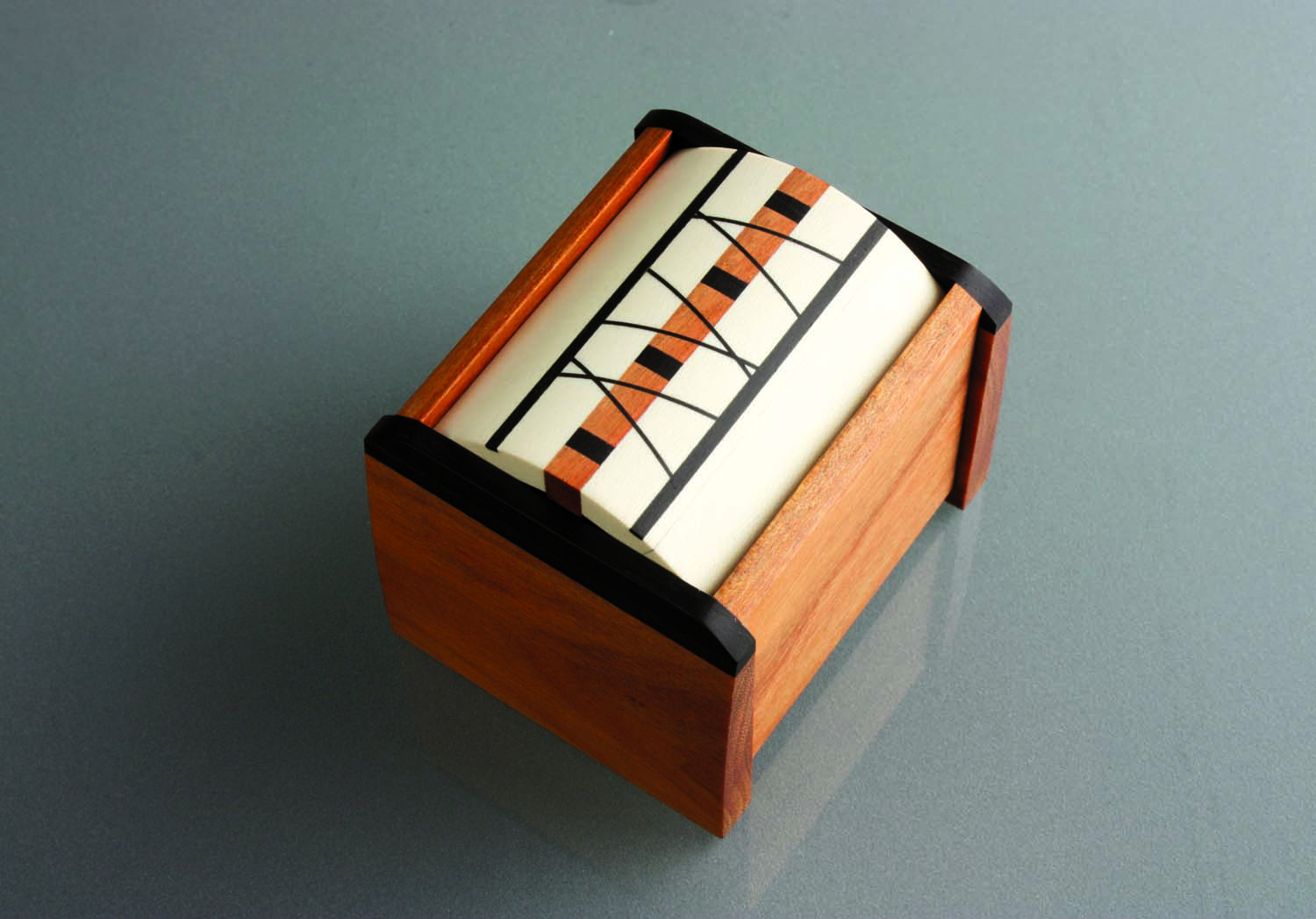 Virtually every box Phil creates includes ebony as a feature or accent. “Working with ebony is like viewing a computer with a high resolution screen,” he explains. “You get amazingly sharp focus.” Ebony is “grainless,” according to Phil, so it doesn’t compete with curves and other strong design elements. Its intense black color helps to showcase the highly figured woods Phil frequently employs, and the narrow strips of ebony that luthiers use for stringed instrument fingerboards are the ideal size for many of his boxes. 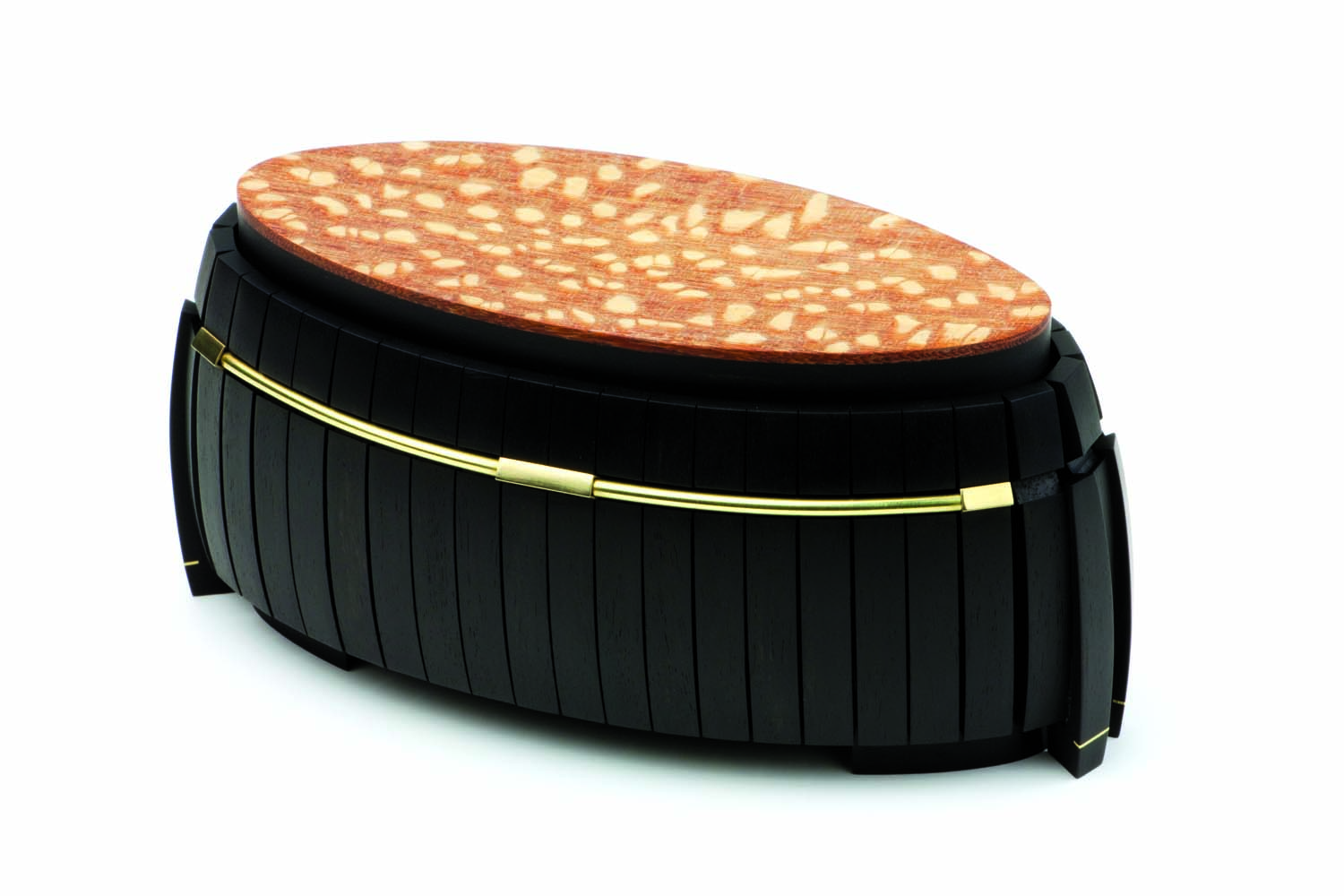 Because of its sharp contrast with ebony, Phil also loves holly. “But holly’s so pure,” he says, “keeping it white while dealing with ebony’s black sawdust can be a hassle.” Phil often incorporates quartersawn wood, “leopard wood,” Chakte Viga and spalted wood in his boxes. He usually resaws spalted wood into veneer-thick pieces in order to take greatest advantage of its incredible patterns. Metal strips and accent pieces also play important roles in Phil’s boxes, because of the crisp detailing they afford. 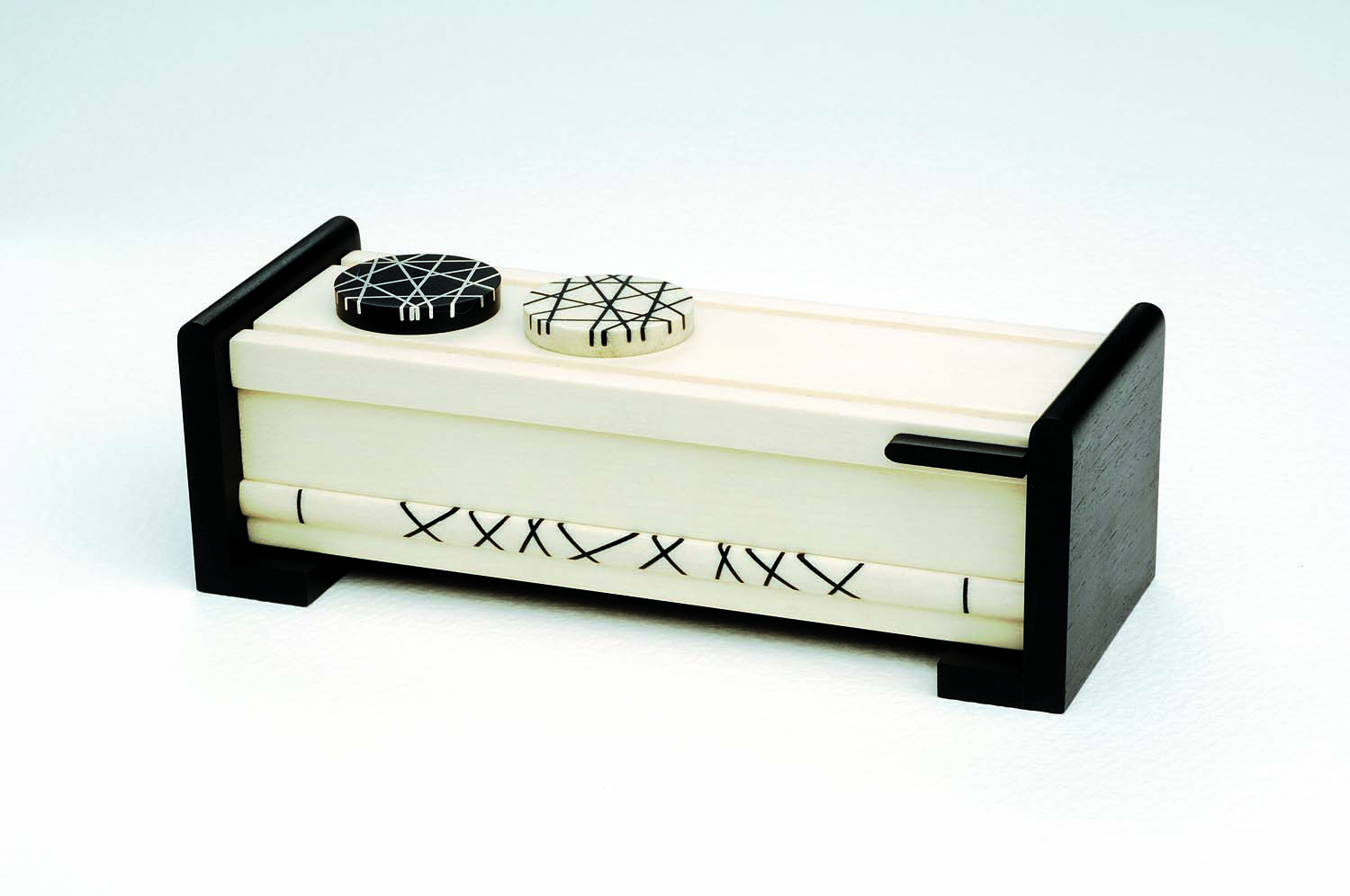 “If you really love the look and feel of wood, it might just love you back,” he explains. “At least sometimes.”

Even though Phil’s works are petite, his shop is stocked with standard-size bandsaws, tablesaws and router tables. There’s also a vintage horizontal belt sander. When asked if he uses special techniques that differ from those of woodworkers who work on a larger scale, Phil muses, “I don’t really know what normal is. I’ve worked alone for the past 30 years.” He commonly uses masking tape as clamps and he uses double-sided tape to affix small parts to sleds or larger pieces of wood for planning or shaping. Indeed, the only assistance Phil gets is in naming his boxes. He and his wife, have come up with some descriptive doozies:  Rocket Booster, Twilight Zone, Inner Wisdom and Left of Center (describing the position of the box’s latch, not its political leanings). 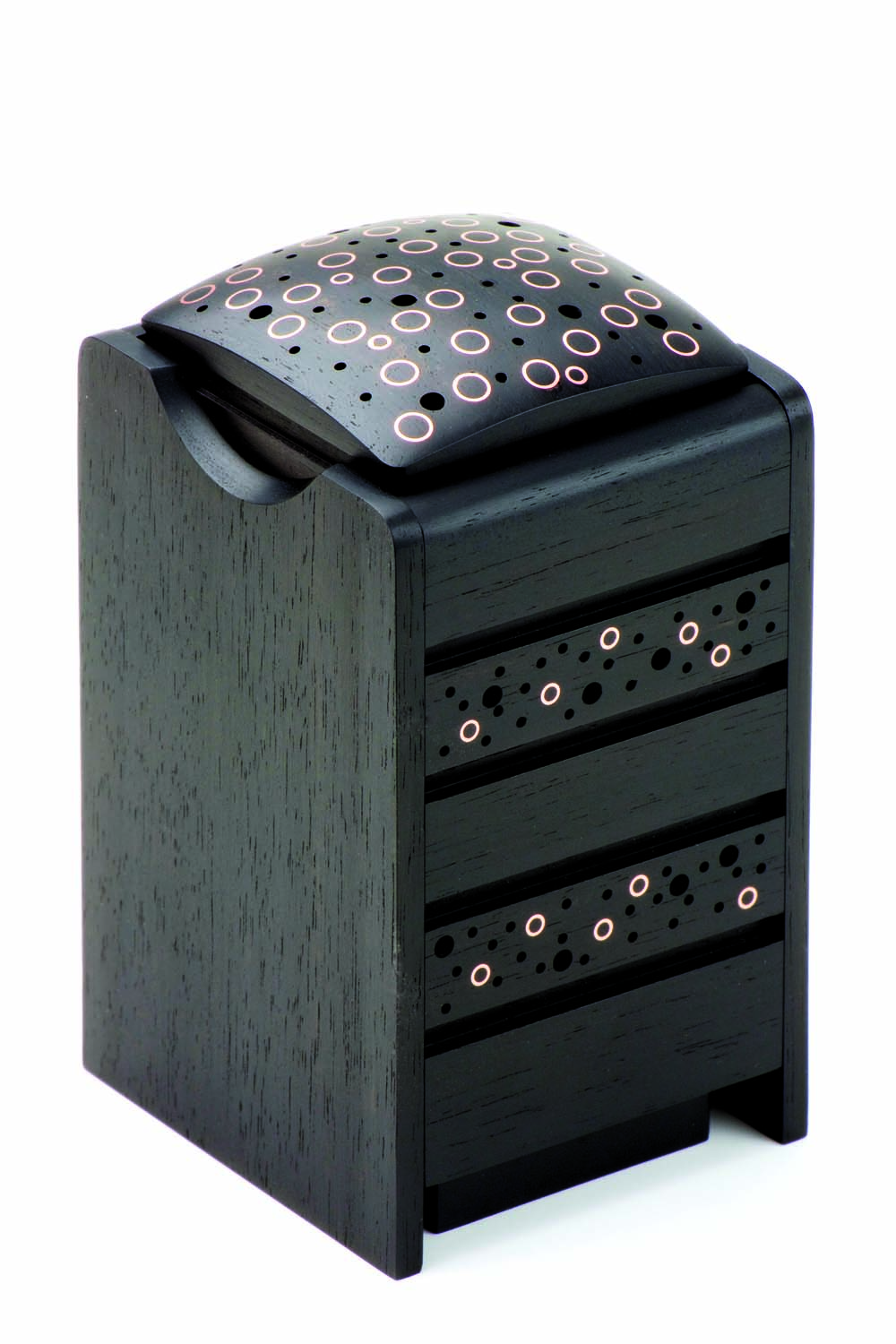 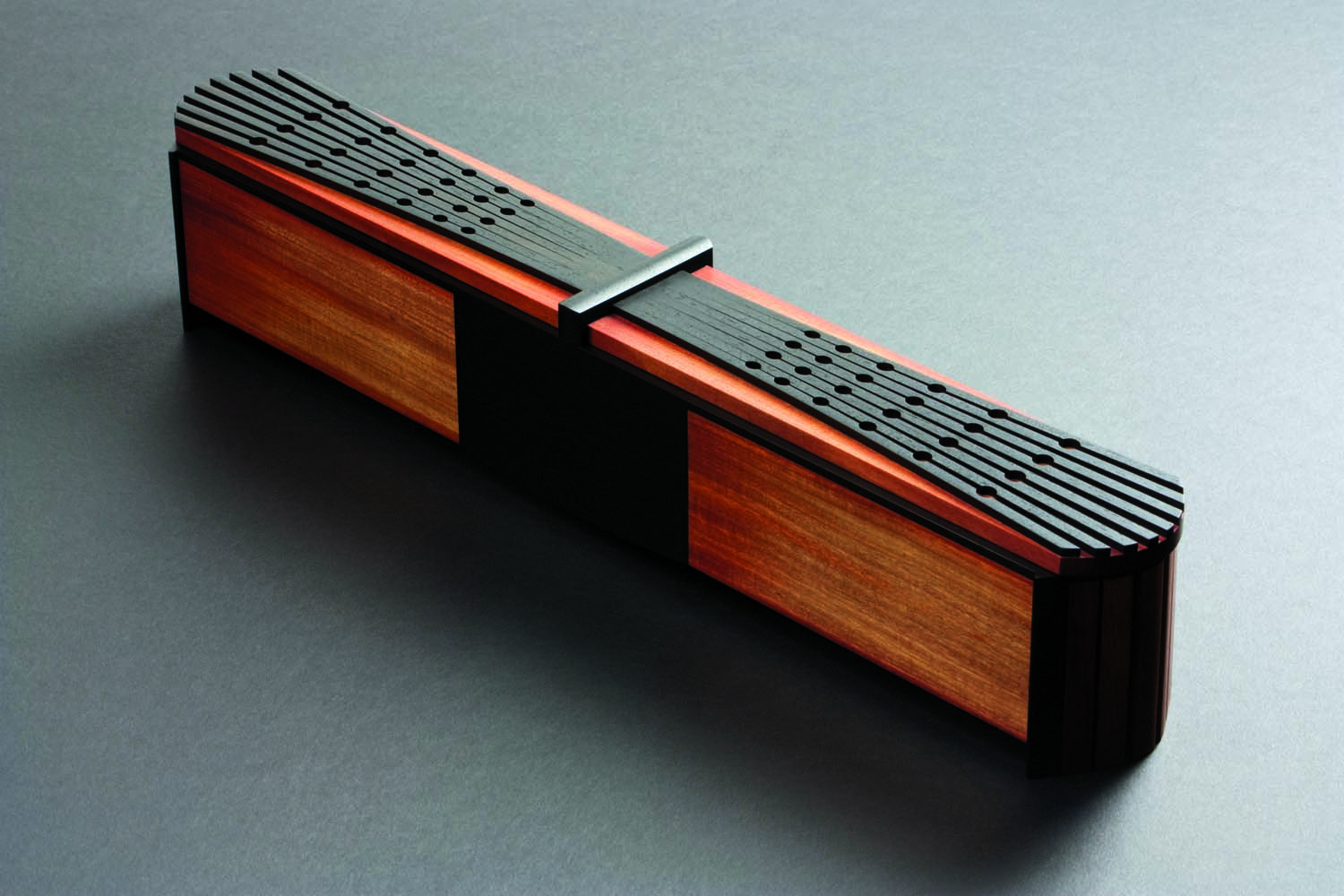 For boxes dominated by ebony and other such woods that sport an inherent sheen, Phil uses Thompson’s Water Seal, which highlights the grain without creating a surface film. For boxes featuring holly and other figured woods that look best under a built-up clear finish, Phil concocts a brew using blonde shellac flakes dissolved in a Behlen alcohol solvent. For spalted maple—which often rides the line between beauty and decay—he uses super glue as both stabilizer and finish. Phil applies super glue until it puddles on the surface. Then, after letting the glue dry, he uses a scraper to reduce the film’s thickness of the film to the bare minimum. 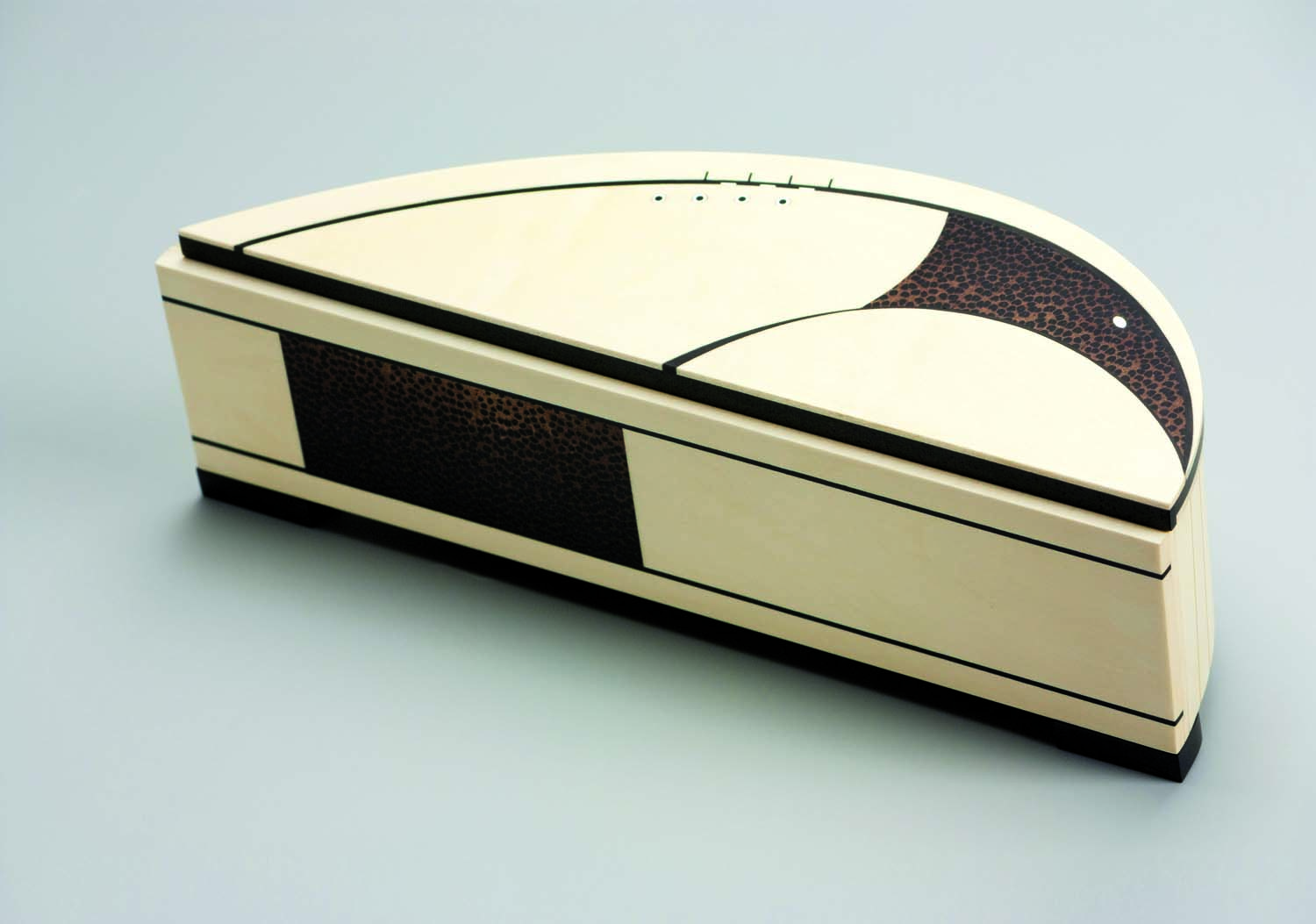 Though Phil crafts an occasional mirror, shelf or other furniture piece, petite boxes have dominated his life and work. “I’ve always preferred to work on a small scale and the box is a good vehicle for that,” he explains. “Some people simply admire them as a visual or tactile joy. Others store a small treasure inside. Either way, I hope they consider the container a little treasure, too.” 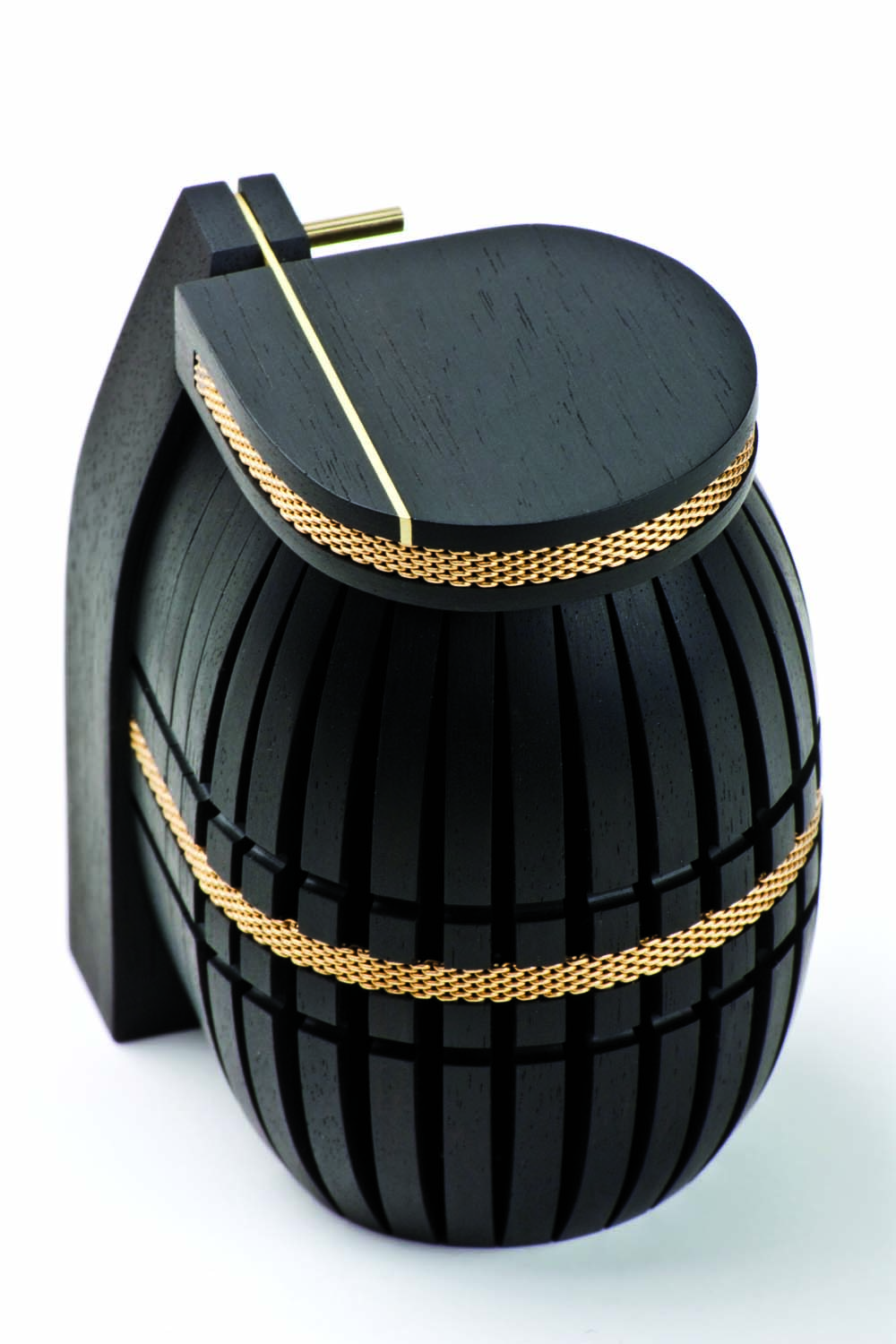 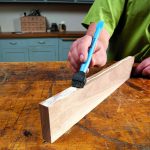 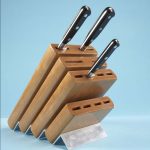