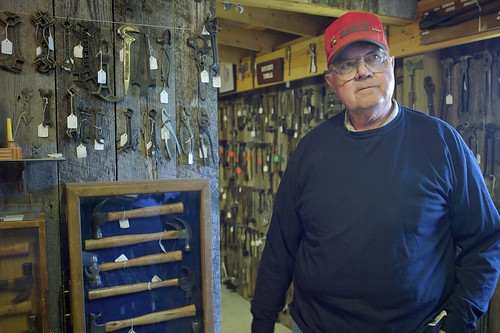 I thought I had a hammer-collecting problem until I met Scotty Fulton.

Fulton set me straight: 50 hammers is not much of a collection. Try 12,000 hammers , virtually all of them different, all of them carefully cataloged by his wife, Karen, and all of them displayed beautifully in his barn outside Maysville, Ky.

Now that is a hammer problem.

Earlier this month I visited the Fultons on their farm where they grow alfalfa hay and amass what could be the largest collection of unique striking tools on the planet. Scotty took me and a photographer through the collection, which fills several rooms and covers the tools of many crafts, from the cabinetmaker to the blacksmith, farrier, coal miner, plumber and fence builder.

Nearly every profession has a specialized hammer, even bartenders who have a hammer for breaking up ice for cocktails.

After walking in the front door of the barn, I was a bit speechless because of the spectacle. But after taking in the rows and rows of tools I managed to ask the obvious question: “How does something like this begin?”

About 1965, Fulton and his new bride moved to Owensville, Ohio, and Scotty needed some tools. So they went to a farm auction where the auctioneer held up a simple claw hammer. Scotty bid. He won. When he went to claim his lot, he found that he had actually won a bucket of seven or eight hammers. He was fascinated by their shapes.

“I couldn’t believe there were this many shapes. I just kept buying them,” he said. “I had 1,500. And then it became an obsession.”

Nowadays, Scotty’s collection grows thanks to eBay and a “hammer huckster” who finds hammers that Scotty doesn’t have and sells them to him. His collection also took a big leap when he acquired the hammer collection of the late Ron Baird, who had 1,322 hammers and co-authored “The Hammer: The King of Tools,” now sadly out of print and expensive.

As a tribute to Baird, Scotty used dozens of hammers to spell Baird’s initials, RB, on one wall of his barn.

The depth of the Fulton’s collection is immense and includes some unusual pieces, including a combination tool that has a hammer and a coping saw,  hammers used by nearby bourbon distillers to knock the bung into a barrel and even the very hammer that Scotty’s doctor used to install a replacement hip in Scotty in 2004.

Here are a few of the other more unusual pieces we saw during the tour:

– A hammer for knocking the snow off horses
– What Scotty called “the tool of all tools,” which had a pipe wrench, pincers, wire cutters, several wrenches and hatchet and , naturally , a hammer
– Tombstone marker’s hammer
– A hammer-shaped perfume bottle from Avon
– Musical instrument hammers for taking out dents in brass instruments
– Ice hammers for TWA flight attendants
– A combination putty knife and hammer
– My personal favorite , an ice hammer that had tongs at the end of the handle that resembled chicken feet.

The Fultons are happy to show off their collection to visitors , sometimes a busload of people will arrive. As we finished up our tour three other visitors arrived and Karen was taking them around the collection. (Scotty says that she knows even more about the collection than he does.) Though it’s not really a formal museum with hours and admission, there is a gift shop. Scotty keeps one table of hammers that he sells to visitors. These are usually hammers he already has in his collection (yes, I bought a few).

And the Fultons aren’t done collecting hammers either.

“There are all kinds of shapes and ones I don’t have,” Scotty said, looking around his barn. “I’ll never run out of shapes to collect.”

To see a slideshow of photos from the hammer museum taken by Narayan Nayar, visit Flickr through this link.