This Art Deco-style Hoosier cabinet was advertised by Rejuvenation. The one I write about here is similar, though more charming.

Instead of planning a day off today, I filled my schedule with business-related meetings. I’m facing too many deadlines over the coming weeks, trying to slot myself into limited openings in my clients’ schedules (amid their travels for vacation and work, family weddings and deaths, and the unpredictable movements of their electricians and other contractors on whom my own work depends) as I prepare for a series of work-related trips in July and August.

One of today’s meetings was to look at an old Hoosier cabinet. The owners are frantically packing for a job-related move and won’t have room for the Hoosier in their new home. Knowing that I wrote a book on Hoosier cabinets, they contacted me in case I might want it.

As a peculiarly American furniture form, the Hoosier struck me as an apt way to start my work day on our nation’s anniversary. Hoosier cabinets were invented in the late-19th century, when increasing numbers of middle-class women returned to their kitchens in response to a dramatic shortage of domestic help. The reasons for this dearth of help are fascinating in their own right. In short, the unmarried women from urban and rural areas who had previously cooked, cleaned, and helped with child rearing found the newly available factory jobs more appealing than being on call 24/7 as domestic servants. (Let that sink in, especially if you know anything about 19th-century factory conditions.)

After decades of allowing their housekeeping skills to atrophy, middle-class women did their best to produce appealing meals and deal with all the other household chores that typically fell to women of the time. An uptick in domestic discord revealed that many were doing an unsatisfactory job.

Enter Catharine Beecher and her more-famous sister, Harriet Beecher Stowe. These scions of a family known nationally for its work in religious and social reform analyzed the layout of the typical middle-class kitchen, then devised systematic suggestions for its improvement. One of these improvements was a simple type of built-in cabinet called a “cooking form,” which combined dedicated storage for specific ingredients with a well-planned work surface. Although I have found no explicit reference to the cooking form in my research on Hoosier cabinets, it’s clear that the sisters’ writings and lectures influenced the methodical organization and compact dimensions of what we now know as the Hoosier cabinet. 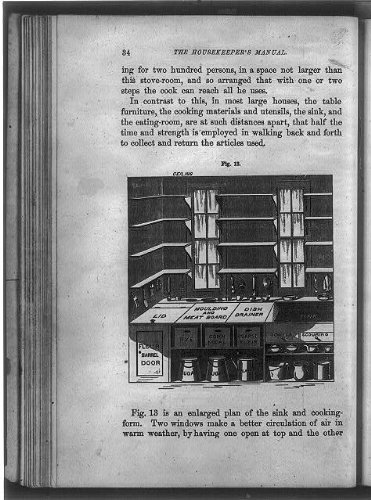 Another intriguing wrinkle to this tale is that the Hoosier cabinet was marketed as a status symbol that proved a woman’s housekeeping prowess. In this, the humble kitchen cabinet was a women’s equivalent of another American furniture form that preceded it by a few decades (curiously, also developed in Indiana), the Wooton desk. I’ve written articles about each of these for the UK publication Furniture & Cabinetmaking. The current issue covers the Wooton desk, and the next will include the Hoosier cabinet. On this July Fourth, I’m enjoying a little naughty pleasure as I imagine descendants of King George and his contemporaries finding these ingenious American creations as fascinating as I do.

My article on Wooton desks appears in Issue 273 of Furniture & Cabinetmaking.