“Edward Bawden working in his studio” by Eric Ravilious, from The Blank Card Company”

I’ve been working out of town for three of the four last weeks, with precious little time in my shop. So instead of writing about joinery, finishing, or any of the other usual topics, this is a good opportunity for me to share one important source of inspiration behind my work: paintings of interiors by some of my favorite artists.

I’ll find myself poring over a book, relishing the details of someone’s living room or kitchen (how can you not be charmed by the orange tabby on Edward Bawden’s rug, or the artist’s teal socks?), and suddenly feel a pang of desire to turn a stool or a table from two-dimensional rendering into an object for use in daily life. It’s a kind of magic we have as makers – almost like having the power to teleport something that originally existed in three dimensions off the printed page and back into the world.

Here are a couple of artists whose work has inspired me.

Although I only became aware of the English painter Eric Ravilious a few years ago–by chance, when I found his name on the back of a greeting card–I fell hard for his work and am a huge fan. Ravilious (1903-1942) was formally trained as a painter and worked as a salaried war artist (yes, there were such positions for artists in the 20th century) documenting military equipment and personnel early in the Second World War. He was presumed dead after a plane in which he was flying near Iceland was lost in 1942 but lives on, vibrantly, through his work. 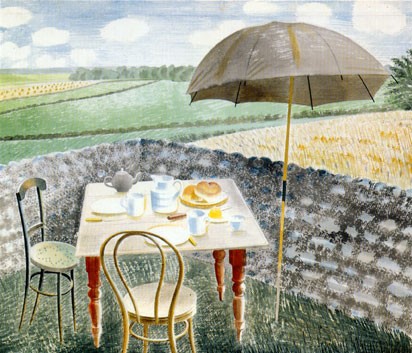 ‘Tea at Furlongs’ by Eric Ravilious shows a sweet farm table with a pair of mismatched chairs. Image: The Blank Card Company

Ever since my mother introduced me, as a child, to the work of Swedish painter Carl Larsson (1853-1919), I’ve been enchanted by Larsson’s life story, his home, and his work. Over the years I’ve made a few pieces of furniture inspired partly or entirely by pieces in his paintings. One is an armoire inspired by the one in his studio.

The armoire in Carl Larsson’s studio. Larsson’s paintings contain a portfolio of Swedish folk furniture from the turn of the 20th century–a bountiful guide to forms, proportions, details, and colors.

For years I fantasized about making a cabinet based on Larsson’s, and in 2014, I did. The hardware on mine is purely decorative. The doors are mounted on retractable hardware, because I built the piece to hide our TV; it also has a long shelf at the top for CDs. Lacking a human skull for the frieze board (or an interest in painting one), I substituted a jaw bone my husband had found in the woods; it’s adhered to the cabinet with Velcro tape. The massive key in the right-hand door was salvaged from an old jail. The finish is milk paint (and no, I’m not thrilled with it; I plan to repaint one of these years). The drawer holds blankets.

The two images here are from Carl Larsson’s A Home: Paintings from a Bygone Age (2006, Floris Books)

Another view of Larsson’s studio shows a couch with a carved self portrait of the artist at the top–a perfect design for a child’s bedroom. (Note one of Larsson’s daughters peeking out from an adjacent upstairs room.)

These are just a couple of artists whose paintings offer ideas for furniture and built-ins refreshingly different from the stuff most of us live with today. And as someone whose palette is most often limited to shades of brown, I, for one, am always glad to immerse my eyes in color.